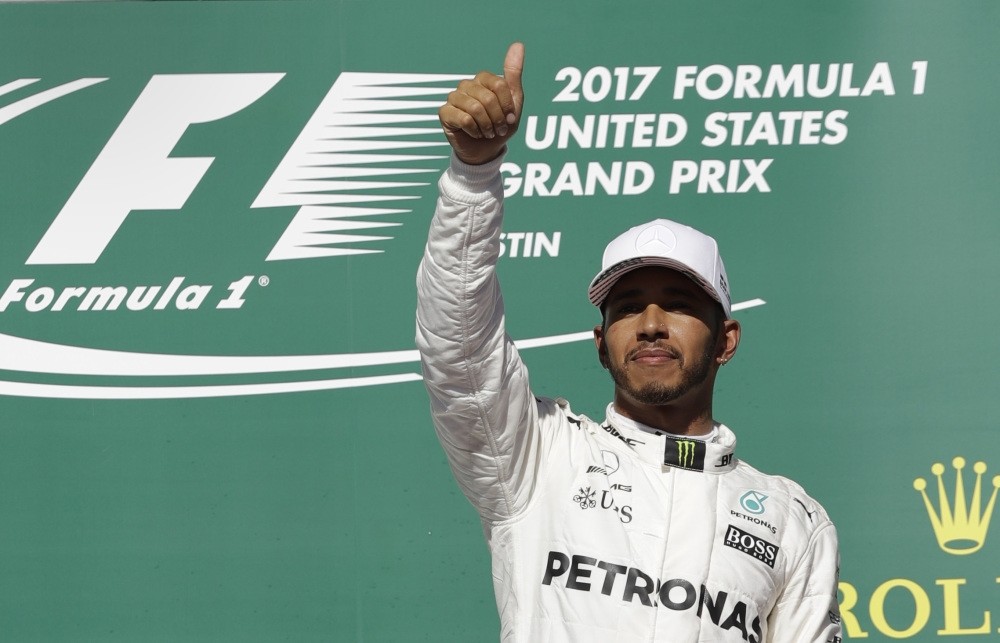 Mercedes driver Lewis Hamilton celebrates his win in the Formula One U.S. Grand Prix auto race at the Circuit of the Americas on Oct. 22, in Austin.
by Mar 14, 2019 10:41 am

Lewis Hamilton is a racing certainty to become Britain's first four times Formula One world champion and any lingering smidgen of a doubt should be swept away at a coronation in Mexico City on Sunday. The Mercedes driver, 1/500 odds on title favourite with British bookmakers who know a safe bet when they see one, has a 66 point advantage over Ferrari's Sebastian Vettel with three races remaining worth a grand total of 75. Hamilton is also well clear in terms of the number of wins, the first decider in case of a points tie, with nine to Vettel's four.

Put simply, Vettel has to score 17 points more than Hamilton at the Autodromo Hermanos Rodriguez to keep his championship hopes on life support as far as the next race in Brazil. Regardless of where the German ends up, Hamilton need only finish fifth to get the party started. And if the Ferrari driver retires during the race, Hamilton will be world champion before he has even seen the chequered flag. The high-altitude circuit could well favour Ferrari more than Mercedes, but Hamilton won from pole position last year and arrives this time with a haul of five victories from the last six races. The pressure, what little there is remaining, is all on Vettel.

It will take the biggest comeback the sport has ever seen to deny Hamilton now, even if Mercedes continue to urge caution. Red Bull could also be in the mix on Sunday, with Max Verstappen also very much in the spotlight after criticising stewards for imposing a time penalty in Austin that demoted him from third to fourth. Mexican fans will meanwhile be firmly behind Force India's Sergio Perez, still hoping for a dream appearance on his home podium, and will have an extra local to cheer on when Alfonso Celis Jr takes part in Friday free practice. New Zealander Brendon Hartley will have a second chance to push his claims for a Toro Rosso drive after making a strong debut in the United States last weekend.