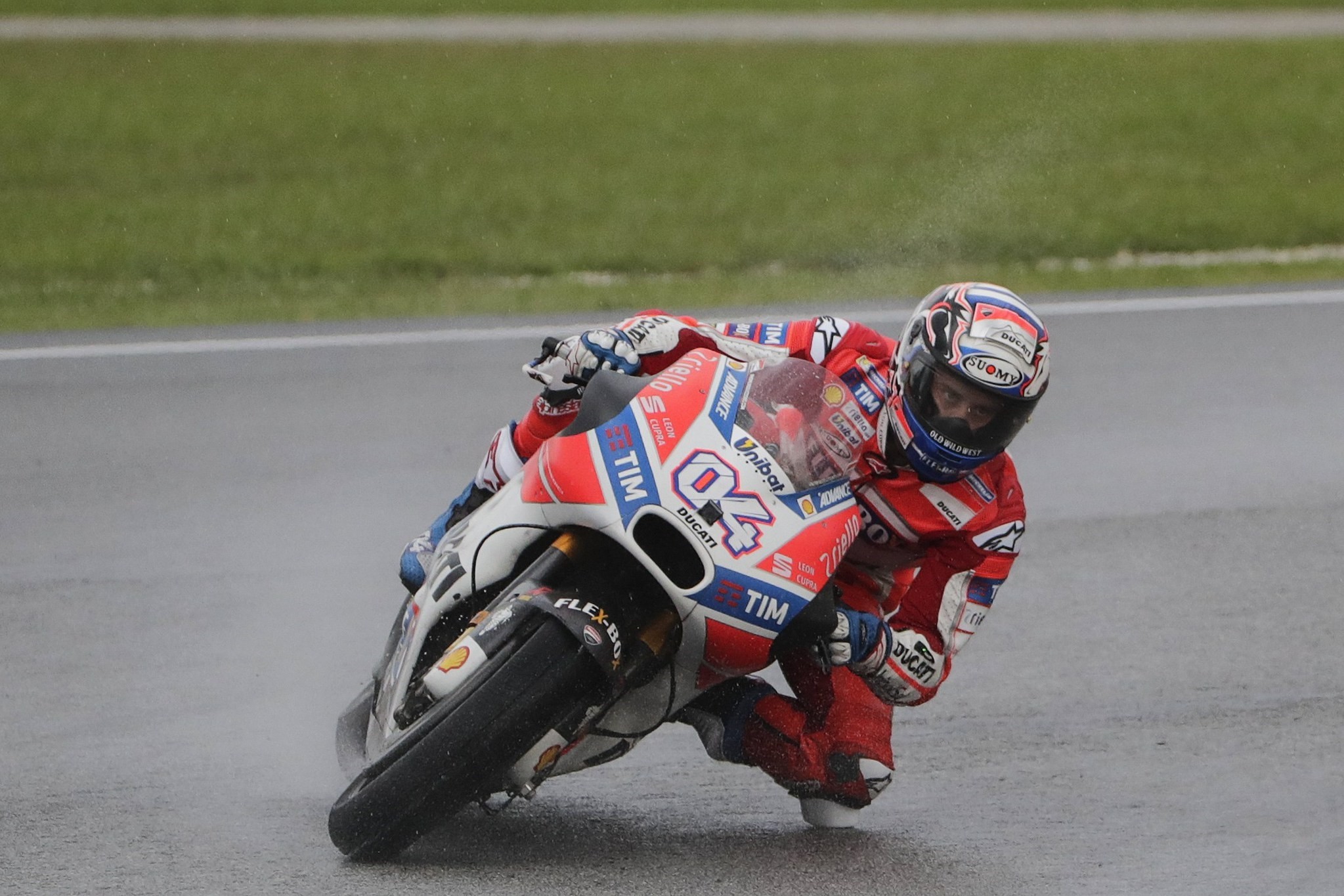 Italian MotoGP rider Andrea Dovizioso of the Ducati Team in action during the 2017 Malaysian Motorcycling Grand Prix at Sepang International Circuit, outside Kuala Lumpur.
by Mar 14, 2019 10:41 am

Andrea Dovizioso won a rainy Malaysian Grand Prix yesterday to keep the MotoGP title race alive as Marc Marquez's coronation was delayed with a fourth place finish. Italian Dovizioso overtook team mate Jorge Lorenzo with four laps remaining to claim his sixth win of the campaign at Sepang circuit and give Ducati a 1-2 finish for the first time this year. Johann Zarco grabbed third on his non-works Yamaha, nursing a soft rear tyre to the finish, frustrating Marquez's hopes of sealing his fourth MotoGP title with a race to spare.

Dovizioso's win is only likely to stall the championship leader's triumph for another two weeks as Honda-riding Marquez will take a 21-point lead over the Italian into the final race in Valencia. Reigning champion Marquez moved to 282 points and with 25 up for grabs in Spain, should wrap up the title if his bike stays on two wheels. Stranger things have happened, however, and 31-year-old Dovizioso was not ruling out his chances of a maiden title.

"Everything can happen during the weekend, and you never know about the weather," he told reporters.

"We know it's difficult but we are relaxed. We are going to Valencia in a relaxed way and will try to do the maximum."

Dovizioso started third on the grid behind pole-sitter Dani Pedrosa yet it was Marquez charging into the lead with a brilliant start from seventh. He was forced to turn wide, however, and fell quickly back to third behind Zarco and Lorenzo. Dovizioso had the roughest start but roared past Marquez on the fourth lap and kept the Spaniard at bay thereafter. Lorenzo made his move on Zarco midway through the 20-lap race and Dovizioso followed him moments later, leaving the two Ducatis to duel for the win. With Marquez holding down fourth behind Zarco, Dovizioso needed to deal with his three-times world champion team mate to be assured of taking the title fight to Valencia. With the controversial whiff of team orders in the muggy Malaysian air, Dovizioso drew ever closer to Lorenzo and was gifted the lead with four laps to go when the Spaniard skidded at turn 15 and very nearly came to grief.

Dovizioso swept past and held on for a 0.743 second-win, perhaps safe in the knowledge that there would be no further duelling from his team mate. Pedrosa finished fifth for Honda ahead of Danilo Petrucci on a non-works Ducati. Italian great Valentino Rossi finished seventh on his Yamaha. In the Moto2 category, Kalex rider Franco Morbidelli sewed up the championship before the race was even run after the Italian's nearest challenger Thomas Luthi was forced to pull out after breaking a foot during qualifying. Morbidelli finished third in the race, with KTM's Miguel Oliveira taking the win. Joan Mir, already crowned champion, won the Moto3 category.