As F1 season begins, Schumacher is still fighting far away 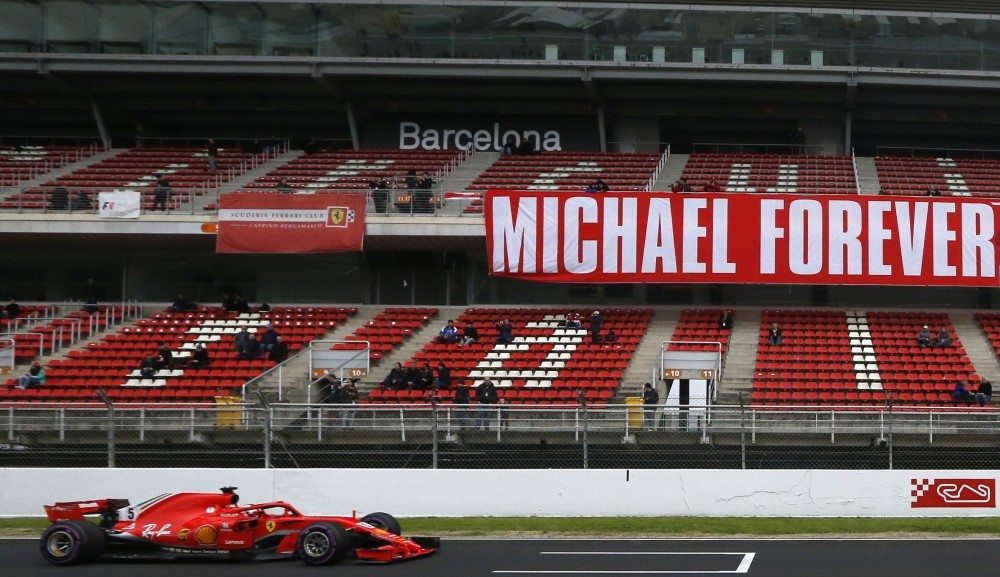 Ferrari driver Sebastian Vettel of Germany drives by a tribute-banner in honor of former German driver Michael Schumacher during a Formula One pre-season testing session in Barcelona.
by Associated Press Mar 14, 2019 10:41 am

As Formula One drivers prepare for the season-opening Australian Grand Prix next weekend, Michael Schumacher continues a very different fight far away

Four-time world champion Sebastian Vettel and Nico Hulkenberg are the only Germans left in Formula One racing when the season starts on Sunday in Australia. It is the lowest number of drivers for the car-crazy nation in 22 year since Michael Schumacher and Heinz-Harald Frentzen competed for Germany in 1996. There remains huge respect for the seven-time F1 champion who, more than four years after a near-fatal brain injury in a skiing accident, is still being cared for at home in the quiet Swiss town of Gland on the shores of Lake Geneva. He's been treated there since September 2014. The thick forest surrounding his castle-like home provides sanctuary from fan and media intrusion with high surrounding walls. While his family fiercely protects his privacy, Schumacher's reputation still towers over F1, and fans of all ages continue to adore him.

"What can be said is that the family really appreciates the empathy of the fans," Schumacher's manager Sabine Kehm told The Associated Press by telephone. "The people really do see and understand (his health situation) is not to be shared in the public eye."

On March 18, 2012, Schumacher began the last season of his F1 career at the Australian GP in Melbourne. He secured the last of his mammoth 155 podiums that year at the European GP in Valencia on June 24, 2012, before retiring definitively at the age of 43. In his last race Schumacher finished seventh behind Sebastian Vettel. It felt somewhat like a changing of the guard, with Vettel growing up with posters of his German countryman on his wall.

A little more than a year later, Schumacher was fighting for his life. While skiing with his teenage son Mick in the French Alps at Meribel, Schumacher fell on Dec. 29, 2013.

He hit the right side of his head on a rock, splitting open his helmet. Doctors worked frantically to remove blood clots from his brain, but some were left because they were too deeply embedded. Schumacher's condition stabilized after he was placed in a drug-induced coma, from which he later emerged. Reported figures estimated his treatment at more than 23 million euros ($28 million) and counting. The exasperated family stopped communicating altogether.

On an F1 track near Barcelona this month, a red flag fluttered over a grandstand facing Ferrari's garage. Two words were written on it - MICHAEL FOREVER - in a permanent testimony to his five titles with Ferrari from 2000-4. Schumacher quit F1 in 2006 after finishing second to Fernando Alonso by only 13 points in a bid for an eighth title. When he announced his comeback for 2010, he swapped the flashy red of Ferrari for the gleaming silver of Mercedes. Schumacher's record seven titles and 91 wins made him an F1 colossus.

Amid the frenzy of Ferrari's success at the turn of the decade, F1 even threatened to give soccer a challenge for pole position in the hearts of Italian sports fans. In 2000, Schumacher delivered Ferrari its first world title since Jody Scheckter in 1979. Schumacher's family appreciates the unfailing support from fans. From June 16 onward, The Michael Schumacher Private Collection - including cars, race-worn helmets and other memorabilia from his F1 days - will be displayed at an old airport in the Germany city of Cologne.

"It is to give back to the fans," Kehm said. "To celebrate Michael the racing driver."