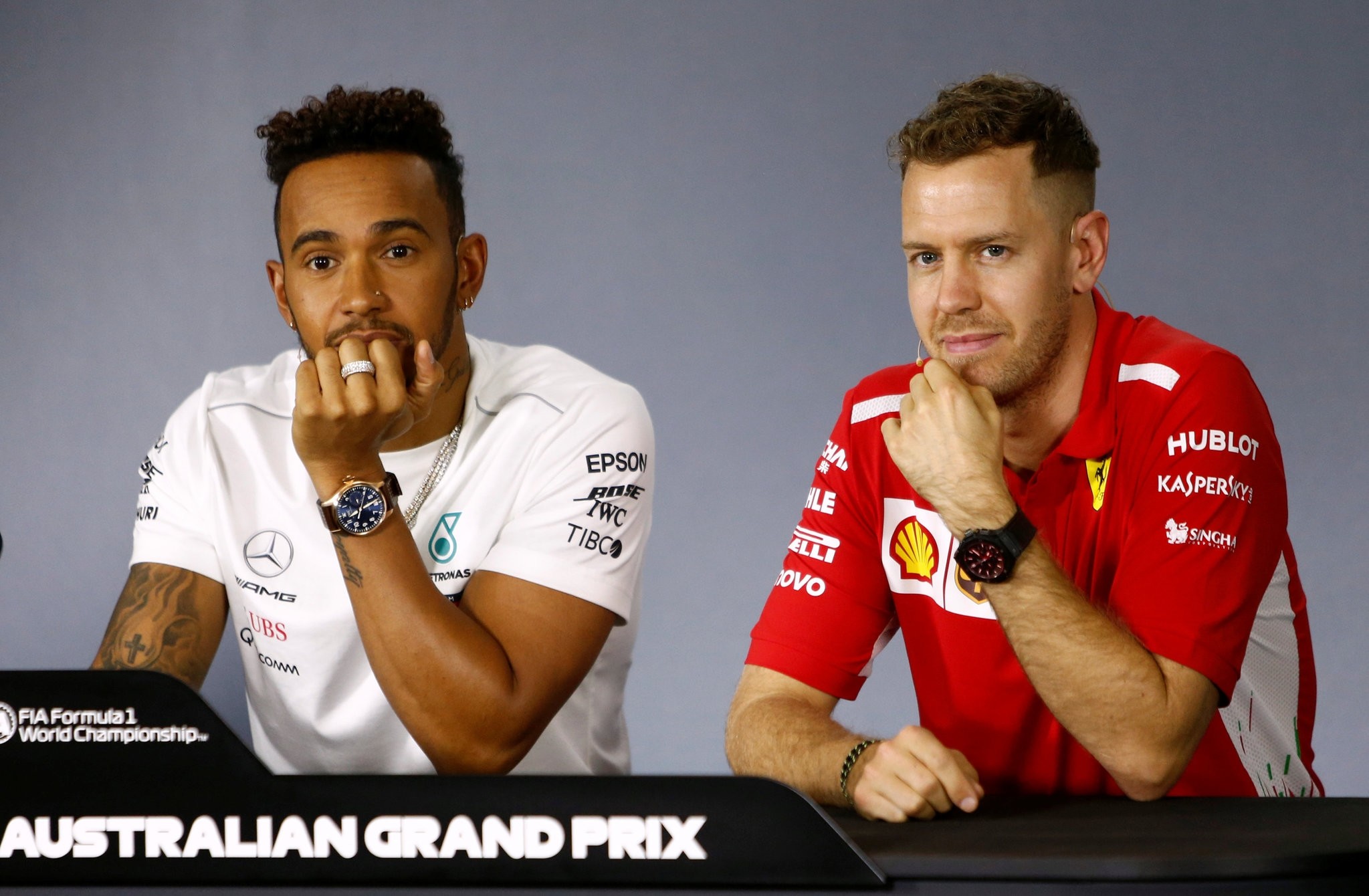 Mercedesu2019s British driver Lewis Hamilton (L) and Ferrariu2019s German driver Sebastian Vettel attend a press conference at the Albert Park circuit in Melbourne ahead of the Formula One Australian Grand Prix.
by Mar 14, 2019 10:41 am

After all the talk and testing, Formula One gets back down to business with the Australian Grand Prix, in which Lewis Hamilton and Sebastian Vettel are both seeking a fifth title while Mercedes is out to equal Ferrari's record of five consecutive drivers and constructors' titles

Lewis Hamilton and Sebastian Vettel are expected to continue their fight for the Formula One title as the season begins with the Australian Grand Prix in Melbourne on Sunday. Both drivers are seeking a fifth title to draw level with Argentina's Juan Manuel Fangio, which would leave only Michael Schumacher's tally of seven ahead of them. Hamilton is now 29 wins short of Schumacher's record 91 wins but the Mercedes driver has said he is not chasing statistics as he aims to repeat last season's triumph.

"It's a long, long season so you don't really think about those kind of things, you don't think about what could be in the sense of matching others," the 33-year-old Briton said in Melbourne on Thursday.

"In my mind I'm trying to break down new barriers, push the envelope. Trying to see how far I can take, firstly, the opportunity I have and then obviously the ability I have and live to my full potential. I don't know what that is, and that's what I'm discovering."

Having won four consecutive constructors' and drivers' world titles - one short of Ferrari's record - and looking strong in testing, Mercedes are again the favorites in a record 21-race season in which the most visible change is the introduction of the halo driver head protector.

However Ferrari is confident of mounting a strong challenge, while Red Bull is the outfit expected to get nearest to the two dominating teams.

"Last year, the competition was very close and there was no moment where we could afford to relax," Mercedes team principal Toto Wolff said.

"Ferrari put up a very tough fight and we had a proper battle between silver and red. This year promises to bring an exciting three-way fight between us, Ferrari and Red Bull."

Vettel goes into the Albert Park race with plenty of self-belief. He won the race 12 months ago, his second win in Australia, while he has taken four other podiums there from 10 attempts.

"I think we have all the reasons to be confident," he said.

"Our car is great. There's stuff to come, so plenty to look forward to - but usually at this point you don't know where the others are. So, that's why it's a bit pointless to come here and say that you'll blow everyone away.

"Based on testing I think we are in good shape. We could be in better shape but it's always like that."

Red Bull has only won once in Australia - in 2011 - and neither Daniel Ricciardo nor Dutchman Max Verstappen has finished on the podium in Melbourne. Ricciardo will be motivated in front of home fans as he starts his last contract year on the team, hoping to become the first Australian to finish on the podium since the race's addition to the F1 calendar in 1985. "We had a good winter. It's all there in front of us now," he said.

Of the rest, Renault (Nico Huelkenberg/Carlos Sainz), Force India (Sergio Perez/Esteban Ocon) and Williams (Lance Stroll/rookie Sergey Sirotkin) will be hoping to get close to the big three, while McLaren (Fernando Alonso/Stoffel Vandoorne) are optimistic having replaced the underperforming Honda engine with a Renault. McLaren's two-time world champion Alonso believes the team is more likely to show its potential in the second half of the season.

"This weekend will be our lowest level," he said. "We will be the team that will progress [the most] relative to other teams, just because the integration to a new power unit will require time."