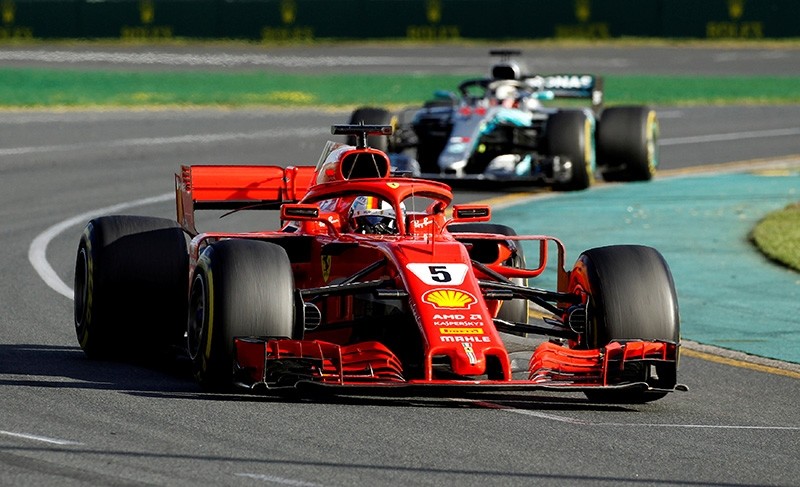 Ferrari driver Sebastian Vettel captured his third Australian Grand Prix on Sunday, holding off his hard-charging Mercedes rival Lewis Hamilton in a dramatic start to the new Formula One season.

It was the 100th podium of Vettel's career and it came in his 200th Formula One race. The German becomes the fourth driver to claim 100 podium finishes, joining Hamilton, Michael Schumacher and Alain Prost.

Vettel finished the race a full 5 seconds ahead of the pole-sitting Hamilton, who had made several late attempts to catch the Ferrari but couldn't manage to pass on the narrow Albert Park circuit and fell just short for the victory.

McLaren's Fernando Alonso made a strong run to finish in fifth place, holding off a spirited challenge by Red Bull's Max Verstappen, who was sixth.

Hamilton led for the first 20 laps before pitting and allowing Vettel to move temporarily into the lead. The race then turned when Haas drivers Kevin Magnussen and Romain Grosjean suffered calamitous back-to-back pit stops midway through the race.

Both drivers had been running strongly in fourth and fifth places, respectively, but saw their cars immediately fail, with plumes of smoke trailing behind them, after coming out of pit lane within two laps of one another.

The virtual safety car emerged as race marshals removed Grosjean's car from the circuit and Vettel took advantage of the slowdown to pit and change tires. He drove out of pit lane just ahead of a confused Hamilton, who got on the radio to ask his team what had just happened.

"Why did you not tell me Vettel was in the pits?" Hamilton asked.

"We thought we were safe, but there's obviously something wrong," his team responded.

When racing resumed, Hamilton stayed close to Vettel's Ferrari, trailing by less than a second for more than 10 laps, but was unable to find space on the tight circuit to pass the German.

Just after turning in his fastest lap of the day on lap 47, Hamilton briefly went off the track on Turn 9 and lost precious time, falling nearly 3 seconds back. He tried to recoup, but couldn't keep up the pace.

Ricciardo also pushed Raikkonen hard for the entire second half of the race for a chance at a podium spot, but the Ferrari driver put in a masterful drive to hold him off and maintain third.

Renault's Nico Hulkenberg finished in seventh place, just ahead of the other Mercedes driver, Valtteri Bottas, who crashed in qualifying and ended up starting in 15th place on the grid after incurring a penalty for switching out his damaged gearbox.