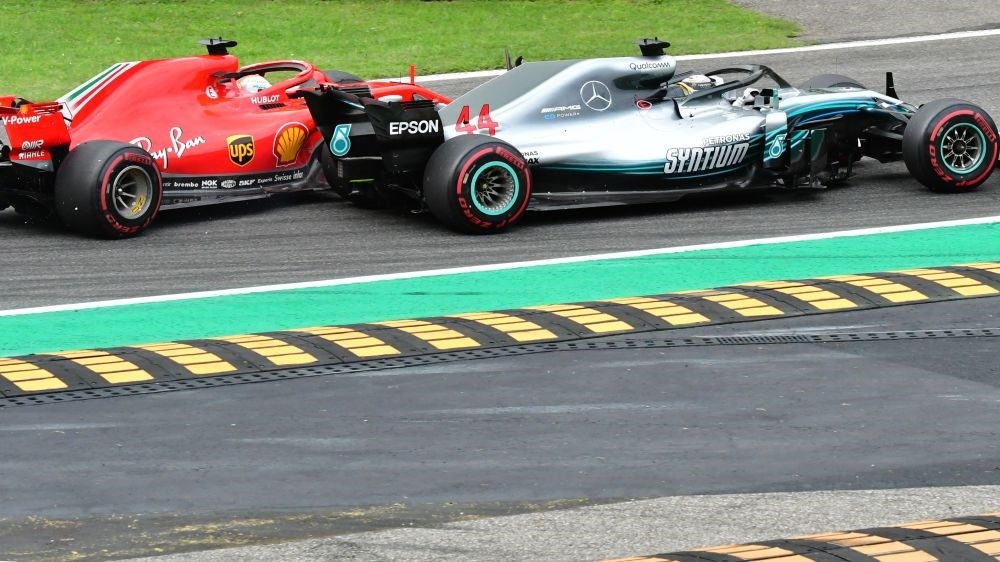 Sebastian Vettel blamed the victorious Lewis Hamilton for causing the first lap collision that wrecked his hopes of winning Sunday's Italian Grand Prix for Ferrari. Experienced paddock observers and media pundits agreed that Hamilton was not to blame

After an eight-year wait, Sunday was when Ferrari were supposed to finally win their home Italian Grand Prix again and Sebastian Vettel was to bite a chunk out of Lewis Hamilton's Formula One world title lead. It wasn't to be. Vettel struck the Mercedes of Hamilton on the first lap and spun off the Monza track while Kimi Raikkonen fell victim to the Brit late on as the tires gave out on the other Ferrari. Hamilton now leads the German by 30 points after his triumph, with seven races remaining in the battle to become the first driver of their era to win five titles.

But Vettel blamed the victorious Hamilton for causing the first lap collision that wrecked his hopes of winning Sunday's (Sept 2) Italian Grand Prix for Ferrari. The four-time champion German said he felt championship leader Hamilton did not leave him enough room when the pair clashed at the second chicane. The collision resulted in Vettel spinning his Ferrari and damaging the front wing while Hamilton's car survived undamaged and he went on to win the race and increase his championship lead to 30 points.

"Lewis saw a little bit around the outside, but he didn't leave me any space," said Vettel. "I had no other chance, but to run into him and make contact. "It is a bit ironic that it was that way. I tried to pass Kimi and then he came. I left him space, but it was me who was the one who spun around.

"He didn't leave me any space. There was no option. I made contact and I was spun around. Then we were at the back and had to come back."

After calling into the pits, Vettel fought back through the field to finish fourth, partly thanks to Max Verstappen of Red Bull taking a five-second time penalty for a brush with Valtteri Bottas in the second Mercedes. The result leaves Vettel trailing Hamilton by 30 points in the drivers' championship with seven races remaining. He said the result was a blow to morale and was especially tough for the fans. But he added: "It's not like I won't wake up tomorrow. It's deflating, but we couldn't do it."

The race stewards investigated and ruled the crash a normal "racing incident" that merited no further action. Experienced paddock observers and media pundits agreed that Hamilton was not to blame. His former team-mate, 2016 world champion Nico Rosberg, said it was entirely Vettel's fault.

"I think it was 100 percent Sebastian's fault," Rosberg told Sky F1. "Lewis left him enough room. "Over and over, he keeps making these mistakes and that's not how you are going to beat Lewis Hamilton to a world championship."

The 1996 champion Damon Hill said the German had "cracked under pressure."

Meanwhile, teenager Lando Norris is to replace Belgian driver Stoffel Vandoorne at McLaren from the 2019 season, the British Formula One team said yesterday. The 18-year-old Briton Norris is currently McLaren's test and reserve driver along with competing in Formula 2. Part of their young driver program since 2017, Norris "will partner Spaniard Carlos Sainz, 23, at McLaren in 2019, as part of a multi-year agreement," the team said. "We believe Lando is an exciting talent, full of potential, who we've very deliberately kept within the McLaren fold for exactly that reason," chief executive Zak Brown said.