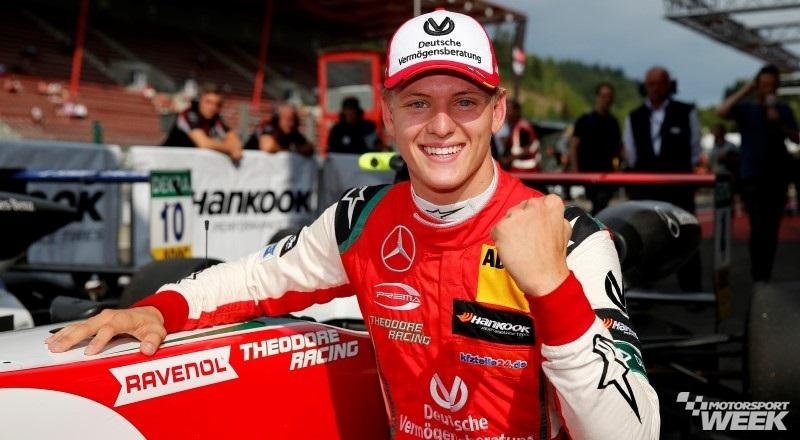 After nine of 10 rounds, Mick Schumacher, the teenage son of stricken seven-time F1 world champion Michael Schumacher, leads the junior F3 drivers' championship by 49 points with 25 more up for grabs in each of the final three races this weekend at the Hockenheim circuit, near Heidelberg. The 19-year-old German is staying calm ahead of the races - two on Saturday (8 a.m. and 2:30 p.m. GMT) and one on Sunday (8 a.m. GMT) - on the German circuit.

"I will still go one step at a time and only look from race to race," insisted Schumacher junior. His father has not made a public appearance since suffering serious head injuries in a skiing accident in December 2013 and is recovering at the family home in Switzerland.

The Schumacher name has brought a huge amount of media attention to the F3 circuit and the young driver for the Prema Theodore Racing team.

"It opens doors, but you still have to prove what you can do," said Schumacher, who has taken control of the drivers' championships with five straight wins and a second place in his last six races. More podium places this weekend would hand young Schumacher his first major title - and open the door to racing in F1.

A top-two finish in the final F3 standings would see Schumacher qualify for a FIA ‘super licence,' a prerequisite for the jump to F1. Schumacher has never made a secret of his ambition to follow in his famous father's footsteps.

"I focus on myself and do not look at the other drivers, everyone has their own development, so you can't compare," he told Agence France-Presse (AFP) subsidiary SID in 2017.

Having stood on the podium after 12 of the 27 races this season, Schumacher Junior has been impressive in the last nine races, finishing in the top three on eight occasions.

His 2018 campaign really took off after his first win this season in July on Belgium's Spa circuit, a track where his father won the F1 Grand Prix a record six times.

Separately, when Michael Schumacher won his seventh Formula One world championship with Ferrari in 2004 it looked like a record for the ages, but Lewis Hamilton and Mercedes are forcing a rethink already. The Briton stands on the brink of becoming only the third man to win at least five titles, with his team's stranglehold on both championships tighter than ever after he won Sunday's Japanese Grand Prix.

The 33-year-old has a contract until the end of 2020 and a team mate in Valtteri Bottas who has proved more beatable and acquiescent than predecessor and 2016 world champion Nico Rosberg. A change of engine rules that might shake things up is not due until 2021, at the earliest. Hamilton's record already bears comparison to Schumacher's, and in some areas exceeds the great German's achievements. Saturday brought the Briton a record-extending 80th pole from 225 starts, compared to Schumacher's 68 in 307 races. Sunday was Hamilton's 71st win, 20 short of the former Ferrari great's 91.