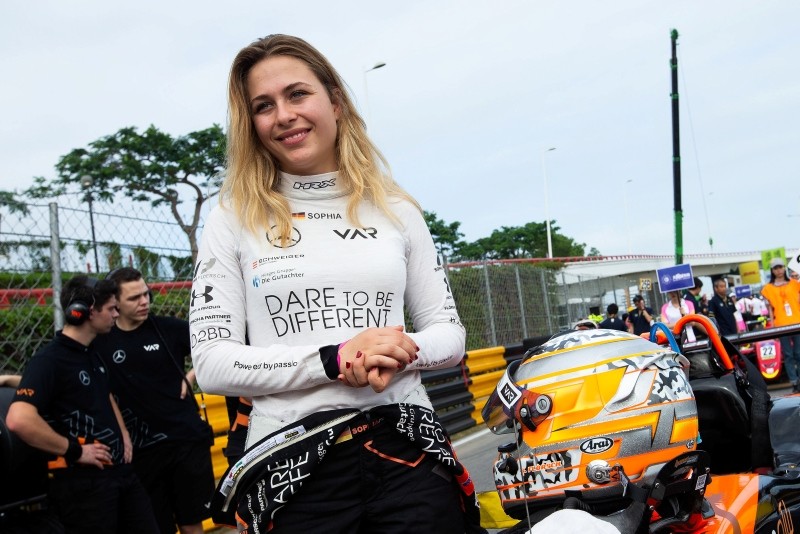 A 17-year-old female teenage driver suffered a fractured spine when her car flew off the track in a horrifying crash at the Formula Three Macau Grand Prix on Sunday.

Van Amersfoort Racing's Sophia Floersch was conscious and stable after the smash when her car became airborne while cruising just under 280 kilometers per hour and hurtled into a marshals and photographers' area.


"All were conscious during transit to the hospital and are now receiving medical treatment. Further updates will be provided as soon as possible," said the Macau Grand Prix Organizing Committee in a statement cited by multiple sources, including the South China Morning Post and shared on Twitter by Italy's Prema Powerteam.

Dramatic footage captured gasps from the crowd as Floersch's machine flew through the air and into safety netting at the Guia Circuit's Lisboa bend, a sharp right-hander.

The German teenager, running 16th, lost control in a contact down the straight, launched off a kerb and bounced off Tsuboi's TOM's Racing car.

A medical report sent to AFP said Floersch was admitted to the emergency room of a Macau hospital with a spinal fracture and vital signs stable.

"Just wanted to let everybody know that I am fine but will be going into surgery tomorrow morning," she said.

"Thanks to everybody for the supporting messages. Update soon," she added.

Her father had earlier told dpa she was able to move all of her body.

Among the others injured, the marshal suffered a broken jaw, while another victim had abdominal pain from a lacerated liver, according to the medical reports by the Macau Grand Prix sent to AFP.

"I hope everybody's OK after this crash, I wish them the best recovery," said European champion Mick Schumacher, the son of stricken F1 legend Michael, according to the Post.

Nineteen-year-old Briton Dan Ticktum of Red Bull Junior Team won the race on the fabled Macau street circuit, which has been graced by F1 greats such as Schumacher senior and Ayrton Senna.

At least three people have died on the Macau Grand Prix circuit.

The Macau Grand Prix also suffered two deaths in 2012 when Portugal's Luis Carreira and Hong Kong's Phillip Yau were killed within two days of each other.

Floersch, who will be 18 on December 1, is competing in her first season in the junior F3 series. She was lying in 15th place when the accident happened on lap four of the street circuit.

McLaren's Alonso wrote: "All my thoughts are with Sophia Florsch after the accident at Macau. Let's hope to receive positive news soon! Keep strong."

Renault driver Huelkenberg said: "Just saw the horrible pictures from Macau... my thoughts are with @SophiaFloersch and the other people involved. Stay strong!!"