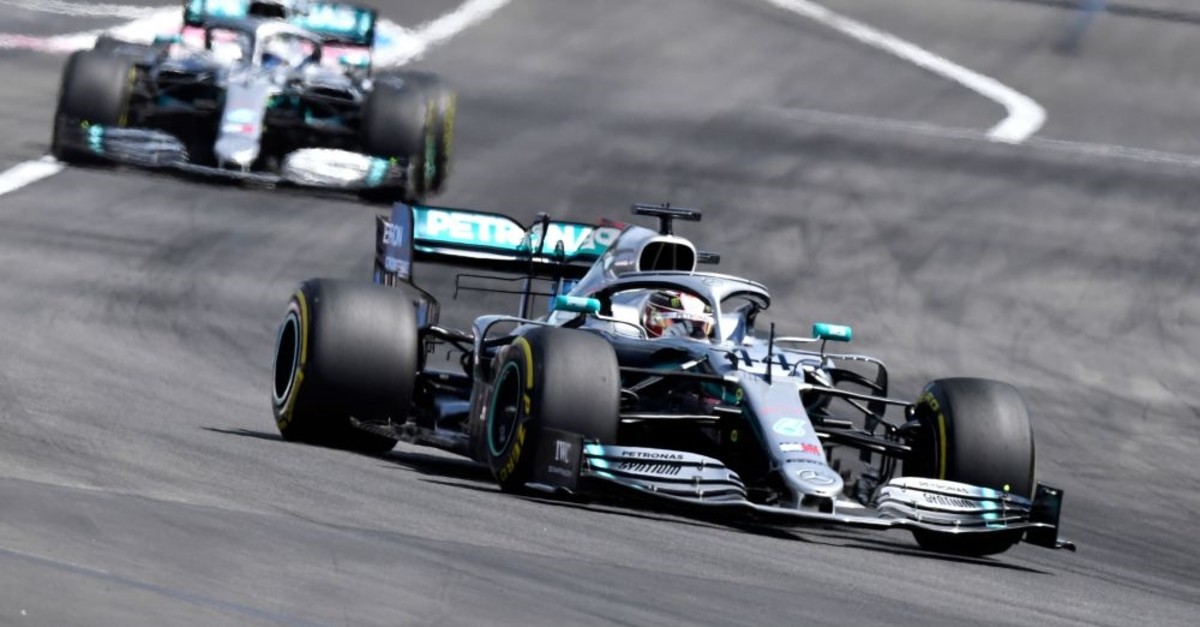 Lewis Hamilton (front) leads ahead of Valtteri Bottas and Charles Leclerc during the Formula One Grand Prix de France at the Circuit Paul Ricard in Le Castellet, June 23, 2019.
by Jun 25, 2019 12:18 am

Fresh off a victory in the French Grand Prix, Formula One great Lewis Hamilton bolsters his standing at 79 career wins, seeking to break the previous record of 91 wins by Michael Schumacher

Lewis Hamilton could overtake Michael Schumacher's record haul of 91 wins by the end of the season, however surreal that may sound.

The Mercedes driver is accelerating towards a sixth title with an air of inevitability after Sunday's French Grand Prix took his tally to 79 career wins with six victories in eight races so far this season. "It's crazy to think that we are where we are right now," he mused at Le Castellet after his fourth win in a row sent him 36 points clear of team mate Valtteri Bottas, and 76 ahead of Ferrari's Sebastian Vettel. "I definitely didn't expect to have six wins at this point and it doesn't feel real."

With 13 races remaining, Hamilton has a mathematical chance of celebrating win number 92 in Abu Dhabi if he continues to steamroller all rivals in a fashion reminiscent of Schumacher in his pomp. To do that he would have to obliterate more records, however. No driver in the history of the sport dating back to 1950 has won more than 13 races in a season or conjured up a run of more than nine triumphs in a row. France was Hamilton's fourth on the trot. No team has won more than 11 in a row in the modern era. Mercedes are on 10. If this season is unlikely to see it happen, the 34-year-old's chances of ultimately overtaking Schumacher, whose records once seemed sure to stand the test of time, are looking better than good. The great German, lest anyone forget, was also no stranger to boring wins every bit as one-sided as Hamilton's pole-to-flag stroll on Sunday. Hamilton has averaged 10 wins a season for the past five campaigns, with the Briton generally picking up an unstoppable momentum in the second half of the season.

Most ominous of all, the reigning champion has never been this dominant so early on. In 2014, when he ended the season with 11 wins, he also won four in a row but they were his only successes in the first eight races. Last year, another championship he ended with 11 wins, he won only three of the opening eight. There are plenty of races to come where Mercedes can be beaten, starting with Austria next weekend where Hamilton and Bottas swept the front row last year but then suffered a double retirement. It would be surprising if the champion fails to strike well into double figures in 2019, however. As Hamilton observed on Sunday, it is all some turnaround from pre-season testing where it looked like Ferrari had the advantage and Mercedes were on the back foot. "In Barcelona I truly believed we had done a good job over the winter," he said. "The car was looking good with the numbers and everything, we got to the test and it was a disaster to drive and it's really difficult to know what you've got to change." The ensuing string of victories, one thanks to Vettel being handed a five second penalty in Canada while leading from pole, came as a surprise but Hamilton is feeling stronger and stronger.

"My feeling within the car is improving as I get more into the season, particularly in qualifying but also in the race," he warned. "I know we've had a lot of success, and they (Mercedes) are used to it, but I hope they continue to keep pushing. That's what I'm doing."