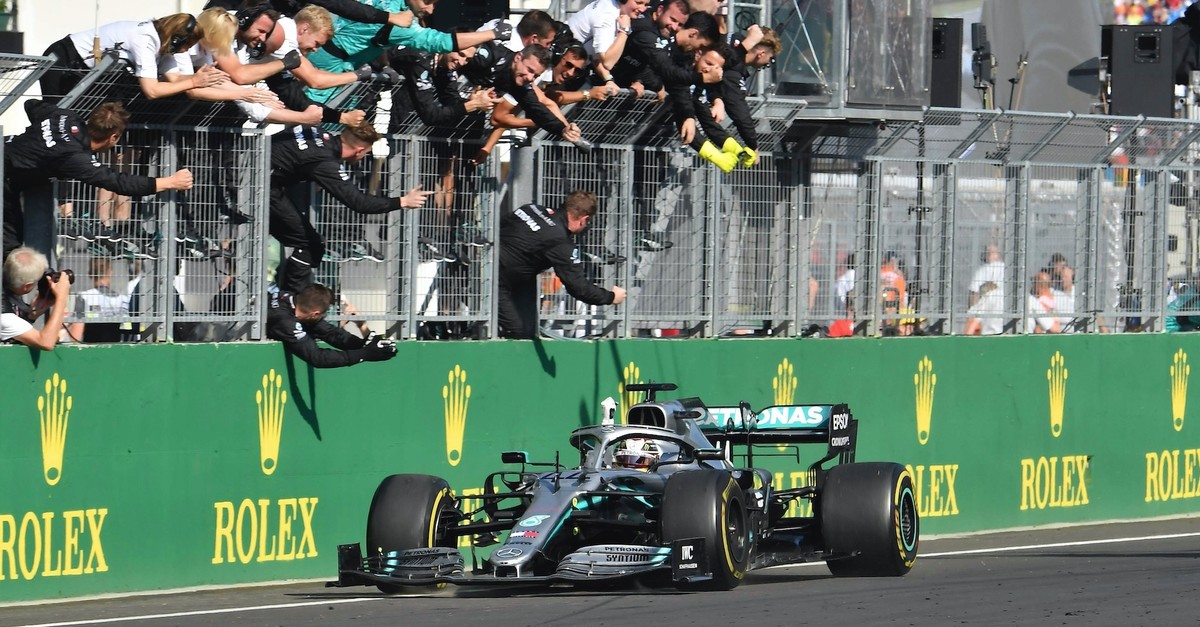 Mercedesu2019 British driver Lewis Hamilton celebrates with his teammates after winning the Formula One Hungarian Grand Prix at the Hungaroring circuit in Mogyorod near Budapest, Hungary, Aug. 4, 2019.
by Aug 05, 2019 12:06 am

In full command of Formula One championships, Lewis Hamilton yesterday overtook Max Verstappen near the end of the Hungarian Grand Prix to earn his 81st victory

Lewis Hamilton won the Hungarian Grand Prix (GP) for the seventh time on Sunday after his Mercedes team made a superb strategy call allowing him to chase down pole sitter Max Verstappen.

A change to fresher, softer tires with 21 laps remaining gave Hamilton the task of closing a 20-second gap which he set about with relish. With the rubber on Verstappen's Red Bull falling apart, he caught him with room to spare and won by around 17.796 seconds.

Hamilton's 81st career win leaves him in total command of the Formula One world championship as he now leads by 62 points from teammate Valtteri Bottas, who finished a disappointing eighth having fallen from second.

Sebastian Vettel took third for Ferrari but the team were never competitive. Vettel's winless run will now extend a whole year to the Belgian Grand Prix, the first race back after the mid-season break on September 1.

The 21-year-old Verstappen celebrated his first pole position on Saturday but could not convert that into a third win from four races. In stark contrast to the rain-induced drama of the German GP last week, this battle was fought under sunny skies and a bone dry track in Budapest.

Bottas locked up into the first corner and damaged his front wing being clipped by the Ferrari of Charles Leclerc. He pitted early for repairs and a long fight back through the pack on hard tires. Verstappen had moved away smoothly but had problems with his own rubber as Hamilton gradually closed in on him before the Dutchman pitted for hards on lap 24.

Mercedes left Hamilton, happy with his own tires, out but in seven laps he could not get in front on the time sheets and emerged 5.6 seconds behind Verstappen when he eventually pitted.

The fresher tires allowed the Briton to slash this lead though to set up a frantic mid-race duel. Hamilton had a nose in front in an outside passing attempt on lap 39 but couldn't make it stick and needed to hit the run-off area.

That was as close as Hamilton came in the stint before rolling the dice by changing to new rubber - a gamble he could take with no risk given the disappointing performance of Ferrari.

He moved within DRS range on lap 66 of 70 and with Verstappen defenseless made the winning pass at the end of the home straight a lap later.

Vettel completed the podium ahead of Leclerc in another poor showing from Ferrari. Leclerc has 156 points and Vettel 132, well behind Hamilton's best 250. Verstappen is third on 181 with Bottas on 188. Carlos Sainz (McLaren), Pierre Gasly (Red Bull), Kimi Raikkonen (Alfa Romeo), Lando Norris (McLaren) and Alexander Albon (Toro Rosso) also finished in the points. Romain Grosjean's Haas was the only car retired.