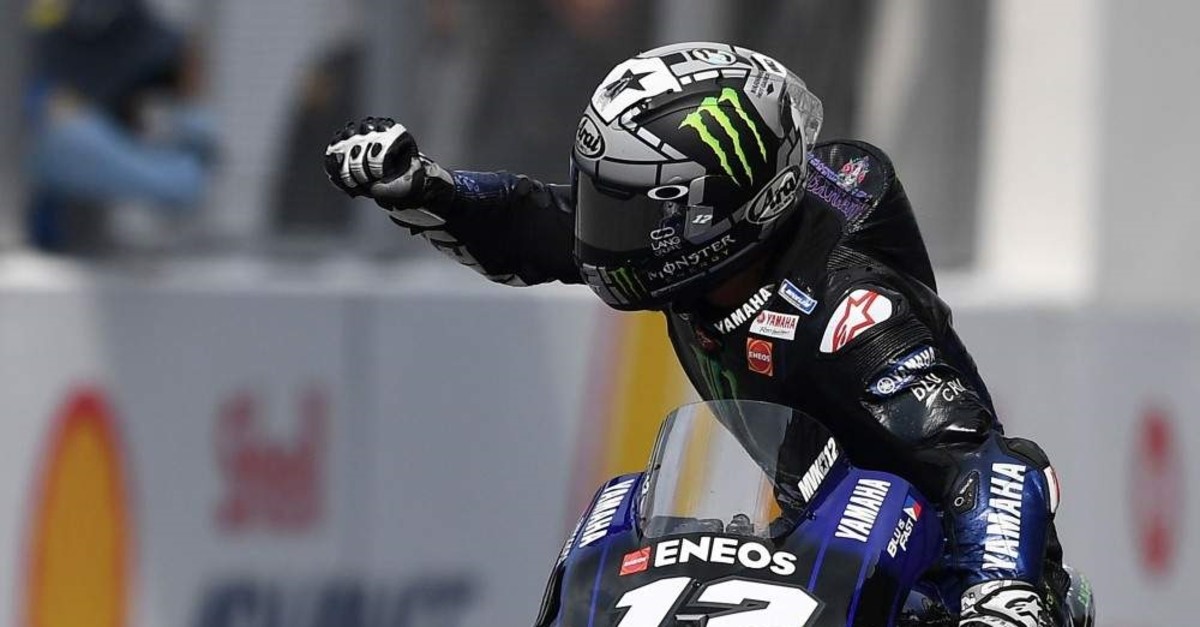 Monster Energy Yamaha's Spanish rider Maverick Vinales celebrates his victory in the MotoGP-class Malaysian Grand Prix motorcycle race at the Sepang International Circuit in Sepang, Nov. 3, 2019. (AFP Photo)
by Nov 03, 2019 4:24 pm
Yamaha rider Maverick Vinales staved off MotoGP world champion Marc Marquez's spectacular charge to win the Malaysian Grand Prix for his second win of the 2019 season at the Sepang International Circuit on Sunday.
A week after crashing out in the final lap at Phillip Island to allow Marquez to win the season's penultimate race in Australia, Vinales made sure there was no repeat of the heartbreak.
The 24-year-old built an early lead and then put on a near-flawless race to stay clear of fellow Spaniard Marquez, who finished second after beginning 11th.
"I felt I had a big potential just passing the first lap," Vinales said afterwards.
"I took the lead in the first...and kept pushing, pushing, pushing. I'm so happy, the team did a great job."
Vinales dedicated his victory to Indonesian rider Afridza Munandar, who died after a crash in the Idemitsu Asia Talent Cup (IATC) race at Sepang on Saturday.
Marquez surged through the clutter to break into the top four in the first lap itself after a late switch to a soft rear tyre though Vinales continued to elude him.
The Respol Honda rider said his strategy was not different from the one that paid dividends in Australia.
"It was an incredible race," said Marquez, whose points haul of 395 is now a new record in a season, eclipsing Jorge Lorenzo's 383 in 2010.
"Vinales was faster than us today and I saw that the chance was only like in Phillip Island - stay just behind him.
"Once he took (a lead of) one-second-and-half, I tried to keep there but then I did a mistake and it got to two-seconds- and-half. I'm happy for my race."
He too took a moment to condole the young rider's death.
"We cannot forget Munandar, he was a young rider. I met him once, he was a nice guy but unfortunately for (the) motorcycle (world), sometimes these things happen."
Ducati's Andrea Dovizioso finished third, denying Yamaha's Valentino Rossi a podium place.
Yamaha's Fabio Quartararo finished a disappointing seventh, failing to reproduce the speed which earned him pole position on Saturday.
Marquez had sewed up his sixth MotoGP title and fourth in a row in Thailand last month.
Valencia hosts the final race of the season on Nov. 17.