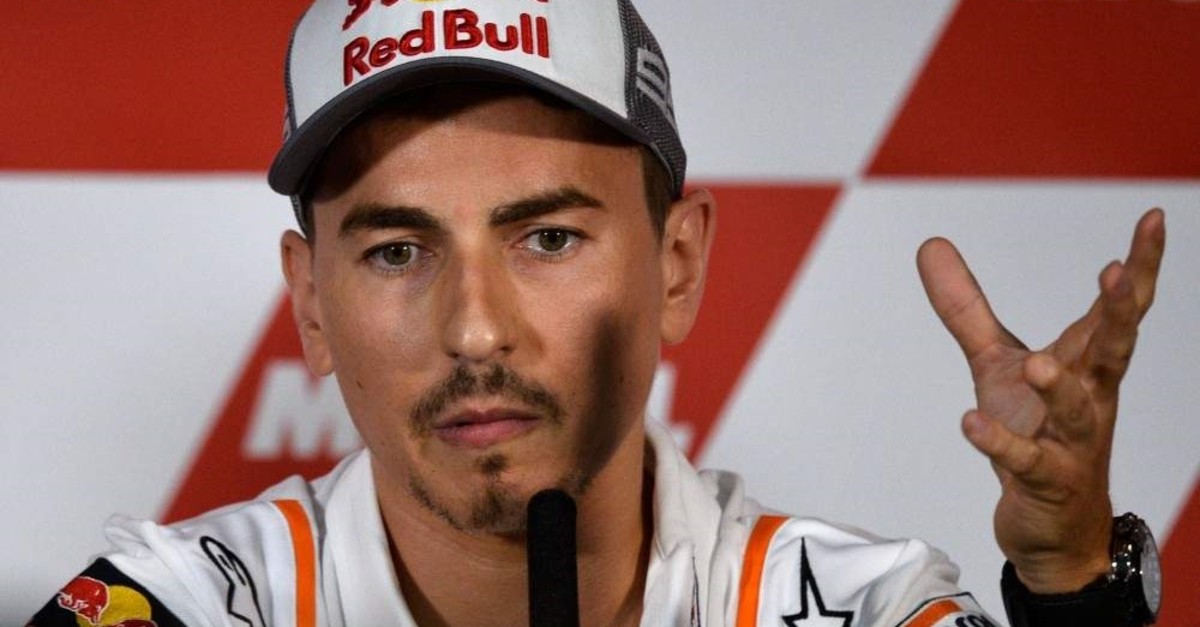 Lorenzo holds a press conference announcing his retirement in Cheste near Valencia, Nov. 14, 2019. (AFP Photo)
by Nov 15, 2019 1:47 pm
Three-time MotoGP world champion Jorge Lorenzo, who suffered a fractured spine this season, said he would retire following the Valencia Grand Prix.
The 32-year-old Spaniard who rides for Honda and claimed the world title in 2010, 2012 and 2015 told a press conference he was pulling out following Sunday's Valencia race, the last grand prix of the season.
The rider who was also twice crowned 250cc champion was retained for next season by Honda but has suffered from poor form and serious injuries this season.
"This will be my last race in MotoGP and after this I am retiring from professional racing," Lorenzo said on Thursday.
"I've always thought there are four significant days in the life of a rider - the first one is when it's your first race, the second one is your first win, then your first world championship - not everyone can win the world championship, but some of us made it," Lorenzo said.
"And then the day you retire. As you all imagine here, I'm here to announce that this day has arrived for me."
Lorenzo said that a series of spills earlier this season with Honda led him to consider retiring for the first time in his career.
"Injuries came to play an important role in my results and my performance so I was not able to be in a normal physical condition to be fast," he said.
Lorenzo fractured his spine in two places during opening practice for the Dutch Grand Prix on June 28, bouncing into four somersaults and hitting the gravel behind his bike.
He described how he was picking himself up off the gravel when he made a snap decision to quit the sport.
"OK Jorge, is this really worth it after what I have achieved," he said he asked himself. "I am done with it, I don't want to race any more."
Later he had a rethink and returned to the circuit but reached a final decision after mature reflection.
"The truth is from that moment the hill became so big and high for me I couldn't find the motivation to continue to climb," he said.
Last Update: Dec 20, 2019 1:42 am
RELATED TOPICS