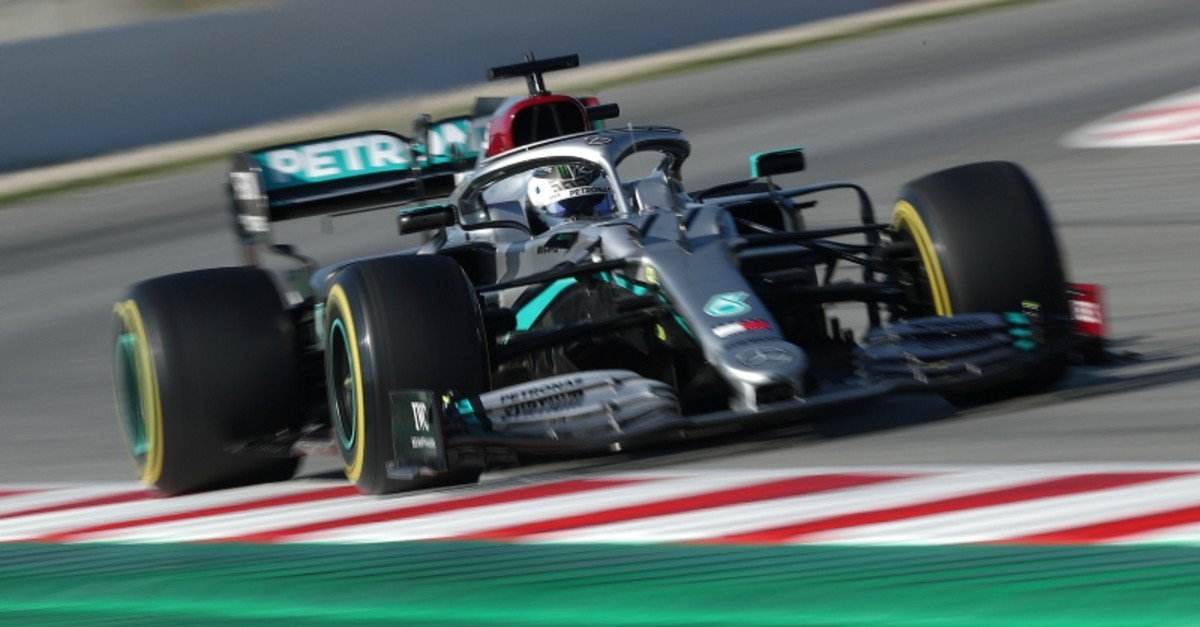 Lewis Hamilton takes part in the tests for the new Formula One Grand Prix season at the Circuit de Catalunya in Montmelo in the outskirts of Barcelona on February 19, 2020. (Reuters Photo)
by Reuters Feb 21, 2020 10:06 pm

Champions Mercedes ended Formula One's first pre-season test with by far the quickest lap time on Friday while Ferrari suffered an engine problem and worried about its pace.

Valtteri Bottas, whose team mate Lewis Hamilton is aiming to equal Michael Schumacher's record seven titles, led the way with a lap of the Circuit de Catalunya only just slower than the all-time track record.

The Finn's time of one minute 15.732 in the morning compared to the record of 1:15.406 he set in qualifying for last year's Spanish Grand Prix.

Bottas had also completed 65 laps – one short of a full race distance – by lunchtime when Hamilton took over for another 73 laps and with the day's second-best time of 1:16.516.

Renault's Esteban Ocon was best of the rest, 1.370 slower but with 76 laps on the board.

Max Verstappen, who did 168 laps on Wednesday, again pounded out more than any other driver in the morning with a total of 86.

Alfa Romeo's Antonio Giovinazzi was the big lapper of the day, with 152 for Alfa Romeo.

Ferrari's Sebastian Vettel was ninth of the 10 drivers on track in the morning, although teams were running on different fuel levels, but stopped with engine trouble 2-1/2 hours into the session with 40 laps done.

The session was suspended for 20 minutes while the car was recovered.

Ferrari said the engine problem would be investigated back at the Maranello factory. A new engine was fitted for the afternoon session and Vettel ended with 100 laps.

There was still some evident concern at Ferrari, however, with team principal Mattia Binotto telling reporters he was less optimistic than at the same stage last season and rivals were quicker.

"How much faster? I think it's really difficult to judge. We will go through all the data in the next days, but I don't think we are as fast as them at the moment," he said.

"Do we have any concerns? Certainly yes, when you are not as fast as you would like to be."

Mercedes-powered Williams also brought out the red flags when Canadian rookie Nicholas Latifi stopped on the pit straight. He ended up last on the timesheets.

The teams will test again at the Spanish circuit for three days next week before the season starts in Melbourne, Australia, on March 15.