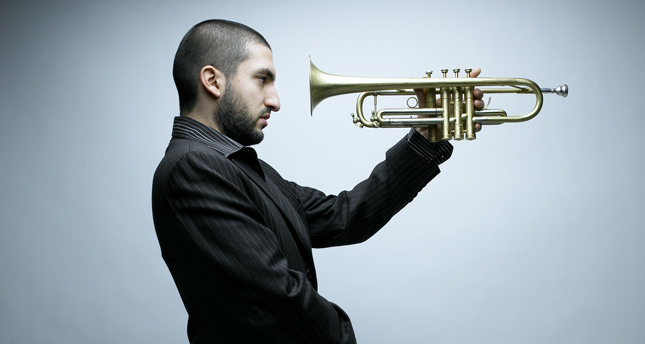 'I have composed this soundtrack not for the sake of fashion but my admiration of Laurent's character and his relationship,' says infamous Paris-based Lebanese trumpeter Ibrahim Maalouf

ISTANBUL – The soundtrack released for the film "Yves Saint Laurent," looking at the life of the famous French designer from the beginning of his career in 1958 when he met his partner in love and business, exclusively features songs composed by Maalouf and was released in January. Sabah newspaper's Özkan Binol interviewed the trumpet-extraordinaire and asked him about his latest soundtrack.

Özkan Binol: You were born in Lebanon and raised in France. How does you upbringing reflect on your music?

Ibrahim Maalouf: Jazz could draw its origins from the U.S. However, there are many different jazz movements that have emerged including American, Scandinavian and European Jazz. There is also another jazz movement that actually emerged from the Middle East. Although I am mostly inspired by jazz, I don't think that my music is based entirely on it. Oriental Arabic and Western music also have great influence on my works. My music is a combination of different types including Balkan and Turkish music.

Özkan Binol: Are you interested in fashion? What is your personal style?

Ibrahim Maalouf: I prefer to wear simple clothes. However, I am interested in fashion.
Yet, I cannot say I follow the trends.

Özkan Binol: How did you feel when composing the soundtrack? You have witnessed an extraordinary life through your music.

Ibrahim Maalouf: I composed this soundtrack not for the sake of fashion but for my admiration of Laurent's character and love. I was influenced by the stormy relationship between Laurent and Pierre Berge. Although Laurent is known to be a very sensitive person, he became a worldwide popular stylist with his strong appearance.

I have been inspired by his sensitive yet strong character. While I was composing the soundtrack, his character was the most influential factor. I wanted to explain the dilemma of his sensitivity and ability to create a dominant fashion style through my music. Özkan Binol:

What did the Director Jaill Espert expect from you?

Ibrahim Maalouf: Jaill asked me to compose a personal soundtrack. He also expected me to compose an album that would be suitable with the soul of a less cliché movie and reflect different music periods. The difficult part of my task was not to compose each and every song for the soundtrack, but to compose something which is closer to traditional soundtrack trends, inspired by pop music and jazz and unlike orchestral music.

Özkan Binol: Which musicians did you collaborate with for this soundtrack?

Ibrahim Maalouf: In order to catch the jazzy soul of the 50s and 60s, I spoke with some of today's most successful jazz musicians such as Stefano Di Battista, Frank Woeste, Nasheet Waits and Christoph Wallemme.

The first part of the classical section was recorded with an orchestra, which was a unique experience for me. Jaill gave me the chance to express myself. It was a very exciting experience.

Özkan Binol: What did you think about the movie?

Ibrahim Maalouf: I had already known that Pierre Niney and Guillaume Gallienne are successful actors. However, I was [very impressed] by their performance. I am a movie fan and think that they did an excellent job in reflecting the relationship between Laurent and Berge.

Özkan Binol: Have you ever composed a soundtrack before?

Ibrahim Maalouf: This is the first time I composed a soundtrack. It [put a lot of] pressure on me. A movie on Yves Laurent has been expected in France for a long time.

This was a big production and was also difficult for me since it was my first soundtrack.

Apart from the director, nobody believed in me, notably the producers. When I was composing the soundtrack, I was on an Asian tour and there was a big time-difference.

This was the second most difficult part of my task. However, I am happy to see that I was successful under unfavorable conditions. Özkan

Binol: Do you have a favorite Turkish musician?

Ibrahim Maalouf: I like Hüsnü Şenlendirici. I have listened to his group. I can say my soul is entirely influenced by his music. We talked twice about working together but didn't get the chance to discuss anything in detail, but I would definitely like to work with him.