A LEGEND OF TURKISH FOLK MUSIC 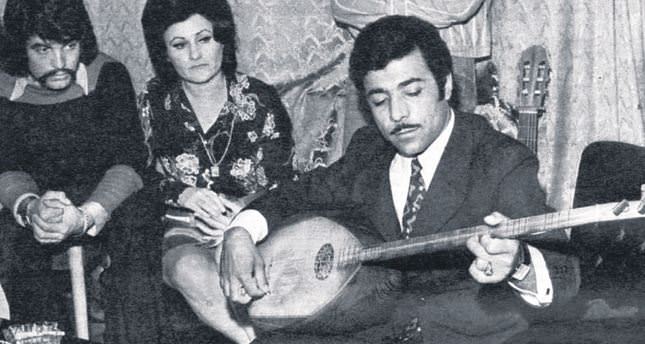 Taught by his father to play the saz, Neset Ertas became a legend of Turkish folk music late in his life and reached modern audiences in his laidback but powerful style.

At 14 he went to Istanbul to start a career in music. After playing and singing in night clubs and the state radio for years he was forced to stop because his fingers became paralyzed.He couldn't earn an income despite his popularity. He spent 23 years in Germany as a migrant. Upon his return to Turkey, crowds embraced him. His last years were a sort of late honeymoon with his audience. He performed many concerts and was at the height of his career.However, he kept his humble attitude and refused the State Artist title, saying, "I am already an artist of this state." He died on Sep. 25, 2012 and his funeral was a national event.

In the 1960s, Turkish critics debated whether or not folklore was the enemy of poetry. In his frequently recited article, Cemal Süreya, a major Turkish poet of the "İkinci Yeni" (Second New) movement, argued that lyrics sung by folk bards were not poetry and the only important aspect of their art was the melody they sung. Some critics supported this idea while others saw it as an extremist view of an ultra-modern poet.

I am a supporter of Süreya's point of view. On the other hand, I should admit that some folk songs are nothing but poetry; especially those bards who understood the modern world and tried to change the traditional aesthetics of old school genres of folk song and were also good at writing lyrics that affect people. Indeed, they did not write but say their lyrics. In traditional Turkish folklore, bards do not write but play their instruments with improvisation and sing by inspiration. And this is the reason why old folk songs are so intimate and touching. This intimacy began to vanish in the second half of the 20th century. New bards were singing cliché lyrics; nonetheless, some exceeded these clichés.Neşet Ertaş is a modern type of folk bard whose work defied time.

The poverty of being an artist

Ertaş was born in 1938 in Kırtıllar, a small village in the Central Anatolia region of Turkey.His father was Muharrem Ertaş, who was also a folk bard. His mother Döne Ertaş was a melancholic woman, which seems to have affected young Neşet. He once said, "From time to time my father went somewhere taking his saz with him. We didn't know where he went and when he would return. My mother made me a fake saz and I used to play it and sing as my mother cried. Indeed, mother was not crying for what I sung; she was crying because she missed father.My mother always cried for my father."

Döne died when Neşet was still young. He always remembered her in his songs in legendary lyrics including affectionate phrases such as "my mother in sorrow," "no one can forget his mother" and "I have two blessings, one is mother and the other love."

Neşet learned to play violin and saz as he was going to elementary school. After his mother died, his father would take him along when he went to perform at local weddings. Thanks to this early experience, Neşet was always very good with live audiences. By the way, it's a pity that we do not have any recordings of Muharrem and Neşet, father and son, playing together.
The only record is their quarrelling over songs.They quarreled about marriage. Muharrem sang a song lashing out at his son and Neşet replied with another song.

Muharrem played the saz at local weddings in various districts of Central Anatolia and his son accompanied him on the violin. They made their living this way and thus Neşet couldn't continue his schooling. He went to Istanbul at age 14 to earn money - and perhaps fame. He went to Şençalar Plak, a music record company in Istanbul, and the boss Kadri Şençalar liked his songs. His first record was produced by Plak in 1957 and titled "Neden Garip Garip Ötersin Bülbül" (Why the Nightingale Sings Strange).

After working for two years in nightclubs in Istanbul, Neşet moved to Ankara. While he was working for clubs in Ankara he met a singer named Leyla. The couple married soon after and had two daughters and one son. These were happy years as Neşet produced many records and gave numerous concerts in different cities in Turkey. He is said to have given six to seven concerts in some cities. The sun of fame was rising over the young folk bard.

In 1978, Neşet's fingers became paralyzed and he could no longer perform music. He became penniless as a result. He decided to move to Germany where his brother was living as a migrant worker. After receiving treatment for his fingers, Neşet began performing at Turkish weddings in Germany. Yet, his fame in Turkey diminished and until 1988 he did not produce any new records in Turkey. Pirated copies of his earlier records were being made and sold in Turkey.

After 1988, Neşet began making official records again and by 1999 he had made 22 albums - an average of two albums for each year. As folk songs became popular again in the 1990s, the number of people who knew of Neşet and his music soared. His fans wanted to see him singing live in concert.

Bayram Bilge Tokel, a performer and scholar of folk music, did much to help Neşet gain the acknowledgment and standing he always deserved.Tokel convinced Neşet to return home to Turkey.He also wrote a biography of the great folk bard titled "Neşet Ertaş Kitabı" (Book of Neşet Ertaş).Furthermore, with Tokel's help his records were refined and re-launched by Kalan Müzik, a mainstream recording company for Turkish folk music.

After his return, Neşet rapidly became a popular icon. His melancholic songs like "Zahidem" (My Zahide), "Neredesin Sen" (Where Art Thou), "Kendim Ettim Kendim Buldum" (You Reap What You Sow) and "Ah Yalan Dünya" (Alas, Lying World) met the needs of urbanites. He was no longer local bard or wedding singer but a national virtuoso.

Neşet was not a traditional folk bard at all. He did not play the old school saz but the electric version, which is now also common in Central Anatolian cities. His style in playing the electric saz does not exactly match the traditional modes of Turkish music. To a certain extent, he plays in disorder.Sometimes the ornaments he adds overwhelm the basic melody. You cannot hear a clear sound from his saz. Yet, this messy sound excites the audience.I feel the entrancement of mourning whenever I put my ear to a Neşet song. And his lyrics are never
shiny; he always sings of deep sorrow.