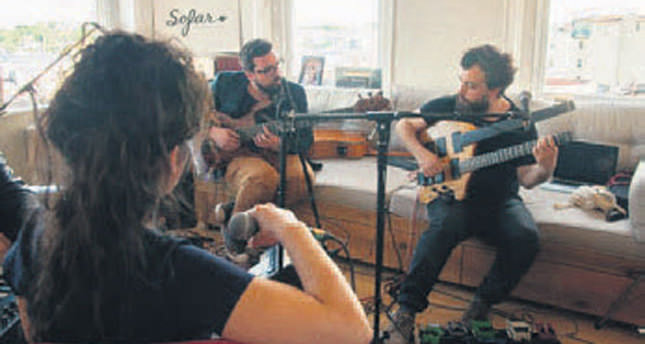 ISTANBUL — Due to overpriced merchandise, soaring ticket prices and hordes of fans brandishing glowing smartphones and tablets, modern concert-going has now produced a backlash where people are gathering to watch live performances in private homes. A group of Istanbul music lovers recently came together in the heart of the city at a private apartment to enjoy three unknown bands.

Sofar (songs from a room) is a new concert experience created by Chicago-born, London-based co-founder of Sofar Sounds, Rafe Offer. He told Anadolu Agency how he came up with the idea for Sofar while in a London bar, trying to listen to "Friendly Fires," a popular English indie band. "Everyone there was talking or texting or drinking," he said.

Offer and his friend together decided to go their house, invited friends and asked them to be quiet during the performances. He never expected that this little idea would end up in Istanbul. Anlam Aslanoğlu, a 29-year-old project manager at the Istanbul Modern Art Museum offered her apartment near the ancient Galata Tower in Beyoğlu for the gig. Although there have been some difficulties with her neighbors, as her apartment is in a historic building, everyone has shown flexibility she said. "There has been a feverish activity since the morning. They have been sound checking and setting up," she added. When 28-year-old Turkish journalist and music fan Eda Demir wrote about Sofar's London organization, she didn't initially know that she would be the one to start Sofar Istanbul.

With the help of an old friend living in London she met Offer. Demir organized her first Sofar Istanbul six months ago. Most bands that played at Sofar applied to be part of the gig and the rest were sought out by Sofar Istanbul. "There is an elimination process," added Demir. All concerts are organized on a voluntary basis. Sofar Istanbul concerts start with a warning, "Walking, eating or using mobile phones is prohibited during the concert," said Demir.

Offer says that he always wanted to come to Sofar Istanbul because it is quickly turning into one of the best Sofars in the world. "I have always thought about Istanbul as one of the few places in the world where everyone can come and live and be together because there have been Christians, Muslims and Jews, people from every country, welcomed here for thousands of years." Fellow organizer, 27-yearold Gözde Tekay said Sofar Istanbul gets about 500 requests for each gig. "We are full after the first five minutes," Tekay added, complaining about the difficulty in finding large houses with enough space for shows."
RELATED TOPICS