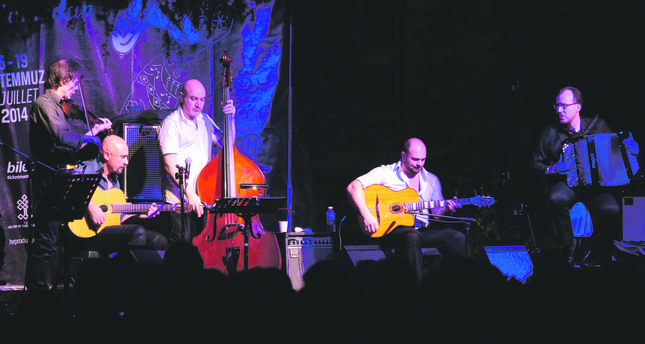 The French Consulate in Istanbul held an iftar on Saturday, celebrating the holy month of Ramadan with an open-air jazz concert

The French Consulate General in Istanbul held its first iftar (break-fast meal) at the French Consulate garden with a spectacular event on July 12 with the "Jazz in Ramadan" program. An open buffet iftar was served before the concert for the guests who were fasting. The French Palace opened its door to guests for the first time during the Islamic holy month of Ramadan to host both an iftar and a jazz concert on the same evening.

The coordinator of "Jazz in Ramadan," Hakan Erdoğan said jazz and Ramadan seem incompatible when it comes to their nature, but added that "Ramadan's atmosphere used to be a kind of festival in which people would both enjoy and worship at the same time. We wanted to revive this tradition by combining jazz music and Ramadan," he added. "Jazz in Ramadan" began on July 5 with the concert of Dutch-Turkish Jazz singer Karsu, later continued by an outdoor concert by Pierre Blanchard Gypsy Jazz Quintet in the garden of the French Palace.

The festival will also host Omar Sosa Quarteto Afro Cubano on July 15, the Trio of Oz and the band of legendary drummer Omar Hakim on July 17 and Grammy Award-winner Rachel Z, the Norwegian jazz virtuoso and the trio formed by Hakon Kornstad (saxophone), Ingebrigt Haker Flaten (double bass) and Jon Christensen (drum) on July 19 as the closing event.