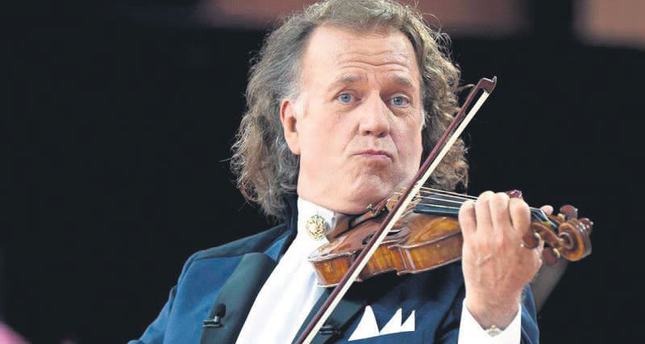 by Daily Sabah Sep 19, 2014 12:00 am
Described as one of the Netherland's most influential musicians, Dutch violinist and conductor André Rieu will come to Istanbul in November as part of his world tour. Last year in the same month, Rieu delivered an impressive performance to Istanbulites by bringing classical music to the Atatürk Olympics Stadium surrounded by colorful balloons and artificial snow.

He surprised the audience by playing Turkish songs. Organized by MAP, Piu Music and CEO Events and sponsored by Yapı Kredi Bank, which is celebrating its 70th year, the upcoming concerts will take place at Sinan Erdem Sport Hall on Nov. 27 and Ülker Sports Arena on Nov. 29. He will be joined onstage with the world renowned Johann Strauss Orchestra.Rieu is reportedly looking forward to coming to Istanbul once more. "The Turkish audience is really fantastic. They are all sincere, passionate and enthusiastic. I felt their sincere and warm feelings. They accompanied the songs, cheered and joyfully applauded us. It was a great concert and I enjoyed it a lot," he said.

Rieu added he had never seen such a stirring audience who loudly sung the songs, saying, "All orchestra members were impressed including me. We fell in love with Istanbul and [its] people at first sight. I am sure I will visit there [again] as soon as possible." He made his name with the "Maastricht Symphony Orchestra," which he formed in 1978. The legendary violinist was described as "The King of Waltz" thanks to his unique interpretations of the waltz pieces of Strauss. Rieu's father taught him how to play the violin, and he continued his music studies in Liege, Maastricht and Brussels. While he was at university, he performed "Gold and Silver" by Franz Lehar, which was a turning point in his musical career. He worked at Limburg Symphony Orchestra for 10 years.

Rieu released albums by De Capo and Philips with the orchestra which he worked until 1987. In 2012, Rieu was the world's best-selling male musician who topped album lists 30 times, won 355 Platinum album awards and has over 350 million DVD sales. He ranked 12th among bestselling musicians in the 2012 list of the POLLSTAR rankings of the concert industry's top performing artists. According to Billboard magazine, André Rieu was the world's most successful male touring artist in 2009.

In a review by The New York Times, Rieu was described as "the Madonna of classical music." The article says his musical performance has the power to embrace the whole world. Every 50th person who buys a concert ticket until Oct. 2 will have a chance to take a photo with André Rieu.
Last Update: Sep 19, 2014 9:54 am
RELATED TOPICS