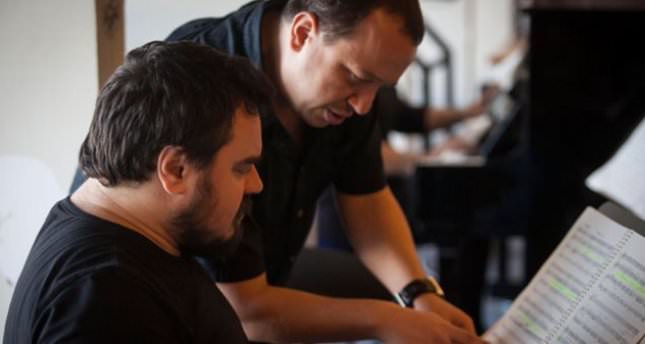 by Daily Sabah with AA Oct 02, 2014 12:00 am
The State Opera and Ballet (DOB) welcomed the new season yesterday. The DOB will present a wide repertoire of 105 productions, including 23 new performances, at its stages in Ankara, Istanbul, İzmir, Mersin, Antalya and Samsun. The world premieres of opera and ballet productions featuring legends of Anatolia and fairy tales will also take place this season. Several legends and stories of Anatolia, such as "Şahmeran" (Shahmaran), "Hekimoğlu" and "Şehrazat" (Scheherazade), will be staged by the State Opera and Ballet. Speaking to an Anadolu Agency (AA) reporter, DOB General Manager Selman Ada said that this season they would present ravishing productions. Adapted by Murat Gedikli, "Dostlar Beni Hatırlasın" (Friends, Remember Me) dance-theater by the Ankara DOB, choreographer Uğur Seyrek's ballet performance "Kaderin Çığlığı" (Scream of Destiny) by the İzmir DOB and the opera "Shahmaran," composed by Bujor Hoinic, by the Mersin DOB will make their world premieres this season along with the Mersin DOB's ballet production of "Piri Reis," composed by Can Atilla, and the Samsun DOB's opera "Hekimoğlu," composed by Tolga Taviş. The Antalya DOB for the first time will stage the ballet production of "Romeo and Juliet." The classical production will be put on stage with choreography by Armağan Davran and Volkan Ersoy. The DOB included most of the sold-out productions of the last season in its new repertoire.

The new season of the DOB includes:
ANKARA


'Hekİmoğlu' the first opera of the Black Sea region

"Hekimoğlu," a popular folksong from the Black Sea region, has been adapted into an opera by the Samsun State Opera and Ballet. Its premier will take place at the Samsun State Opera and Ballet on Oct. 18 at 8 p.m. "Hekimoğlu," also known as "Hekimoğlu İbrahim," was written for the namesake folk hero who is celebrated for his courage, righteousness, helpfulness and bravery. The first opera originating from the Black Sea region, the promotion for "Hekimoğlu" took place at the Samsun State Opera and Ballet building. The maestro of the opera, Tolga Taviş, said that as all Turkish people are familiar with the character of Hekimoğlu thanks to the folksong, they found it suitable to adapt and stage it as a dramatic opera. Thus, the Samsun State Opera and Ballet evaluated the theme and came up with an operatic story focusing on the human characteristics. Although opera is a Western art form, performances based on Turkish culture can eliminate prejudices. "Operas such as 'Hekimoğlu' are good examples to prove to people that we can adapt our culture and our story to an opera," Taviş said. He emphasized that opera is an international art form and said: "It is possible to stage a British play in Turkey, but staging a Turkish play in the UK or U.S. is an exceptional case. Theater is an art that forms according to the rules of the country from which it originates, and it can be an international play only if you push it hard. But opera is not similar to it." Taviş said they wanted to present a local Samsun story to international circles and make it immortal through opera. Figen Ayhan is the director of the opera, and Çağda Çitkaya did the set design. "Hekimoğlu" is a story of the clash between good and evil. The opera starts as if evil has beaten good; however, in the end Hekimoğlu becomes a hero to people. The story of the opera indicates that good and those who believe in justice become immortal and that those who live forever become legends. Although there are deaths in the opera, it is underlined that the good and the just are immortal. Bertan Rona, who wrote the lyrics of the production, said they visited and conducted research in the village of Yassıtaş in the Fatsa district, which is referred to in the folksong "Hekimoğlu." He added that they tried to highlight the core of humanity in the opera.