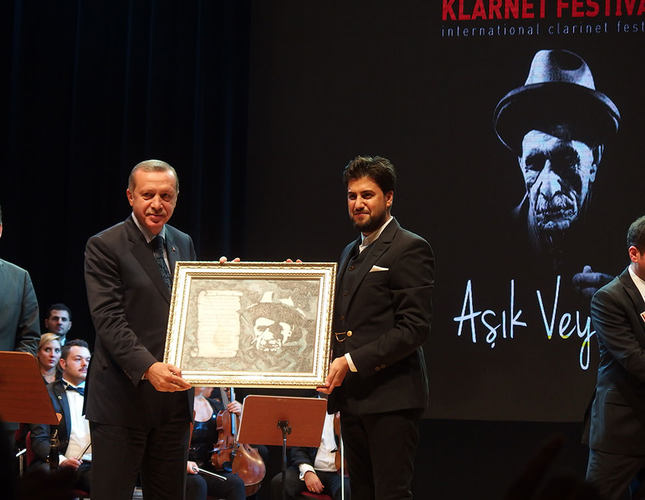 by Daily Sabah Oct 13, 2014 12:00 am
Clarinet masters from around the world gather for the third International Clarinet Festival currently being held in Istanbul until tomorrow. Aiming to develop cultural interaction through the tender sound of the clarinet, the event began on Oct. 8 and presents an audiovisual fest for music enthusiasts. The festival, which made its debut in Edirne two years ago, was created by eminent clarinet virtuoso Serkan Çağrı, currently the event's artistic director. Clarinetists from different countries are performing to strengthen the ties of solidarity, peace and friendship through their music.

The festival's previous editions were welcomed with joy by locals during the open air concerts. The event program not only draws audiences to concert halls, but also ferries, subways, trams and public squares alongside other highlighted venues in Istanbul. Spreading all around the city, the free clarinet recitals revive the works by distinguished Turkish clarinetists.

Similar to previous years, clarinetists under 18 had a chance to show their skills at the Genç Nefesler Klarnet Yarışması (Young Soul Clarinet Competition) that took place at Istanbul Commerce University on the first day of the event. As part of the festival, "respect concerts" are held to promote famous Turkish musicians who created a global impression in music around the world.

During a press conference ahead of the concert, the singers expressed their happiness to keep Aşık Veysel's music alive. Çağrı said he is proud to be leading an international event for the last three years. A biographical documentary depicting the life of Aşık Veysel was shown at the concert. Yavuz Bingöl exclusively performed songs for peace. He said although the world is going through hard times, solidarity and peace will come soon. Bingöl underscored the importance of humanity and sustaining peace regardless of language, religion or race.

President Recep Tayyip Erdoğan and some of his delegates attended the concert as well. Erdoğan's chief advisor, İbrahim Kalın, performed Aşık Veysel's renowned song "Uzun İnce Bir Yoldayım" (I am on a long narrow road) with the bağlama. At the end of the concert, the president accompanied the song with musicians on stage. Erdoğan said the song sheds light to his political journey and he is honestly working and will continue to work on a similar long and narrow road with full sense of mission. Referring to the song's lyrics, Erdoğan said the world looks like a two-door inn and people cannot escape from entering through the doors of birth and death. He stressed the most important thing is to make favor and leave behind a world surrounded with kindness and beauty.

Who is Aşık Veysel?

Aşık Veysel is known as Turkey's most prominent Anatolian bard of the 20th century. He was born to a farming family in Sivas' Sivrialan village in 1894. At the age of 7, he suffered from smallpox that broke out in Sivas from which he lost sight in his left eye. Following a later accident, his right eye was also blinded. However, he never gave up singing and successfully recited folk poems. He learned to play the works of historical bards with his bağlama inherited from his father. The poet Ahmet Kutsi Tecer encouraged him to create his own poems and introduced his works to the public. The musical genius traveled around Anatolia for years while reciting new poems and folk songs. When he got older, he returned to his hometown and passed away on March 21, 1973. He became an unforgettable name through his songs. Before his death, Aşık Veysel asked his friends to remember him. The famous bard is still commemorated at national and international music events.