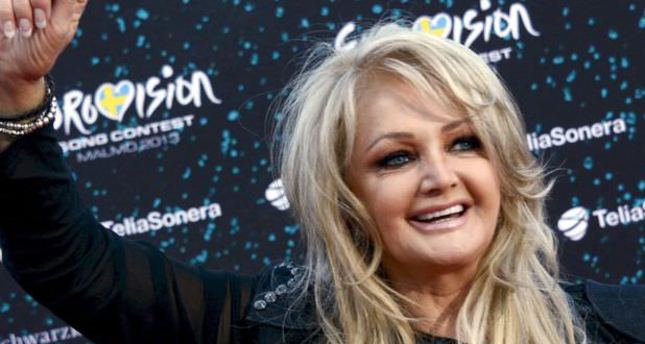 by Cenk Erdem Oct 17, 2014 12:00 am
The star, who represented the U.K. in the Eurovision with her song "Believe in me" in 2013, is now bringing her songs to Istanbul. Bonnie Tyler is mostly known in Turkey for her song "Holding Out for a Hero" which is the original of the song "O Benim Dunyam (My World)" sung by Turkish superstar Ajda Pekkan.

You are one of the legendary singers of the world of pop rock, which of your songs still excites you when you are on stage?

Bonnie Tyler: It still truly excites me when I witness hundreds of people singing along with me to "Total Eclipse of the Heart" in concerts. This is one of the songs that my concert audiences know off by heart and it really makes me happy. My listeners also know the songs "Holding out for a Hero" and "Lost in France" and this gives me great pleasure.

In 1977 you were diagnosed with nodules on your vocal chords, which initiated a very surprising story for your career, can you tell us a little about this story?

Tyler: This is a condition that can occur in many singers and I too experienced it. Following the operation I was forbidden from speaking for 6 weeks but I could not refrain from talking and breached this prohibition. As a result I had a low voice and thus I thought that my music career was over. When I went back to the studio after 6 months to record "It's Heartache" everybody in the studio thought I sung with great emotion and "It's Heartache" became my first big hit.

Your career began as the singer for a group called Bobby Wayne and the Dixies. Who was it that first encouraged you to sing?

Tyler: The only person to encourage and inspire me was my mother. She loved opera and her voice was very well suited to opera. I now hold my dearest mother's photo and look at the woman who raised me with music and guided my career.

I had read somewhere that you grew up with Motown music and the songs of Janis Joplin, Tina Turner and the like, these days which female artist on the market is your favourite?

Tyler: I am still a great fan of Tina Turner. Amy Winehouse was a great songwriter and great singer but I can't understand why she treated herself in such a destructive manner.

The French version of "Total Eclipse of the heart" called "Si Demain" that you performed as a duet with Karen Antonn sold over 2 million copies in Europe, what did it feel like to become a hit once again with one of your most famous songs?

Tyler: The song was the top selling song in France for 12 weeks running and this time I truly embraced the moment. When it was a hit in 1983 there was a very intense promotional effort and a series of concerts and I was very nervous. This time my self-confidence was at the level it ought to be and I was able to truly enjoy its listings success. CENK ERDEM