Ibrahim Maalouf: Trumpet Master from a family full of artists 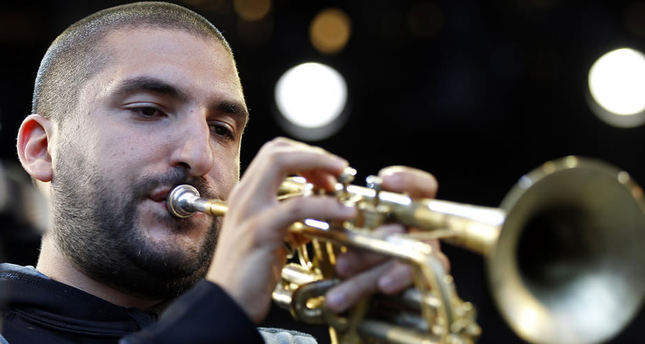 by İklim Arsiya Oct 24, 2014 12:00 am
Ibrahim Maalouf, who utilizes many different musical genres, will be one of the many performers at the festival. He grew up in Beirut in an intellectual environment under the influence of his uncle Amin Maalouf and began to study music under the guidance of his father who is also the inventor of the four-valve micro-tonal trumpet, called the quarter tone trumpet. Maalouf has released five albums including "Illusions" (2013). He also studied classical, baroque, modern and contemporary repertoires during his musical training and even though he does not have formal jazz training, he was well-received by critics for his strong technique and improvisation. He has been recognized in the jazz, pop and rock music worlds and he has performed with well-known artists such as Sting and Vanessa Paradis. On the eve of his performance at the Cemal Reşit Rey Concert Hall on Saturday, Oct. 25th, Daily Sabah conducted an interview with him.Daily Sabah: When did you know for sure that you wanted to become a musician? How did this journey progress?

Ibrahim Maalouf: I started playing music very young. I've always loved it. When I was 17 I decided to study music at the Paris National Superieur Conservatoire. But only when I finished my studies at the age of 22, I really decided to play music for a living. And I have never regretted it.

DS: What was the role your parents played in you becoming the exquisite jazz musician you are today?

IM: Thanks you for asking the question in this manner! Well, my father was next to me every day teaching me everything I know and my mother always encouraged me to play music and create what's in my mind. So they definitely helped a lot. But it's not so exceptional, since they both are professional musicians.

DS: What type of music inspires you? What are the things you use as inspiration?

IM: Mostly people and the world I'm living in. Of course, my childhood has always been very important, since, like everybody, childhood is what we build on. Now I don't only compose things about my childhood, but I have to admit that it still has a big influence on me today.

DS: What has been the most memorable moment of your life since you started as a musician?

IM: I don't think I have one unique memory, but many many many great ones. However I guess the most powerful ones are all the concerts I did with my father between the ages of 8 or 9 and 15. He took me along to all his concerts to play with him. It built my personality and my professionalism for sure. And it's of course during these concerts that I spent lots of time with my father.

DS: Your very unpredictable style of music always keeps us listeners on our feet. What can we expect from your upcoming albums?

IM: Well, many many different things that I hope will keep you surprised. I think the most beautiful thing in music is that you can surprise people, always create something new, something that people don't expect from you. That's the reason why none of my albums sounds like any other of mine. I always try to look for something new. If one day I feel that I don't have anything new to say, I'll probably stop and do something else.

DS: Who are the artists besides your parents that inspire you to make music?

IM: So many different ones...

DS: When you pick up your trumpet what do you feel? Do you think that you express yourself better through your music?

IM: Yes definitely. When I was young I had a hard time speaking. It was difficult to speak in French because at home we used to speak only in Arabic. And it was as difficult for me to speak in Arabic, because my vocabulary did not evolve with my age. I still speak Arabic like a young child. So growing up with a lack of languages, music came and saved me. It's not only the trumpet. It's composing music.

DS: What is it about the trumpet that attracted you?

IM: To be honest, I did not like the trumpet for many years. Between the ages of 7 and 22, I believe I played the trumpet because it made me fell closer to my father. I did not like it so much, it was too loud for me. But then I discovered that it was possible to play softly too and then everything changed. It's like when you spend lots of time with a person you don't necessary like, but you just accept them because it's a friend of your parents. And one day you discover that they are a great person.

DS: The song "Beirut," from your album "Diagnostic" has deep meaning behind it. Tell us about how this song came to be and what made you write it.

IM: I was walking in the streets of Beirut in 1993 - I was 12. For the first time in my life I was walking in the ruins of Beirut trying to imagine how it would look if I would rebuild it my way. I was composing this melody while I was walking. After three hours of walking I faced a terrible thing. There was a huge bombing that happened a few hours before I passed by and the rescuers were trying to pull out the last bodies. I got scared. I took my Walkman, put [the headphones] back over my ears and ran away. There was a Led Zeppelin song, "Stairway to Heaven" playing on my Walkman.

DS: How does it feel to play the trumpet your father invented?

IM: It's great. I'm proud of it. It's important for me to be close to my tradition, my origins and my culture and at the same time mix it with other modern, Western influences.

IM: I never decided this. It has always been. Since I was 3 I invented things. I was just very lucky because my parents used to tell me it was cool and interesting. They used to say they were proud of me so I kept doing it. And after many years it made me feel confident in doing the same thing, but maybe with all the background from my childhood. So maybe it's slightly more organized.

DS: Could you tell us about the people who have inspired you or you have written for on your albums?

IM: My father I guess mostly. Since he taught me everything I know, but so many other artists. Jazz, pop, classical music, Arabic music, electronic, Indian, Turkish, African, et cetera... so many.