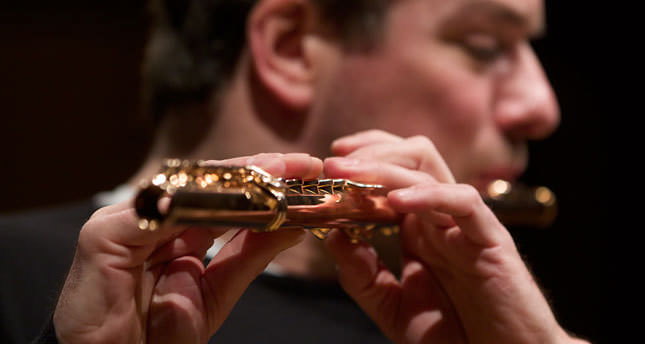 by AA Oct 29, 2014 12:00 am
The Cemal Reşit Rey Concert Hall (CRR) invites Istanbulites to an exciting concert program in which prestigious musicians, orchestras and musical groups will perform during the first week of November. Internationally reputed Swiss flautist, Emmanuel Pahud, who is also the principal flute player in the Berlin Philharmonic Orchestra, will give his first concert in Turkey on Nov. 3 at the CRR. His solo flute recital presents Baroque-era music along with famous modern music exclusively composed as flute solos in different periods of the 20th century. On Nov. 4, Pahud will give an advanced solo flute workshop for students at the CRR.

Europe's leading orchestra, Capriccio Stravagante Renaissance, will perform on Nov. 4 under the conductorship of American virtuoso harpsichordist, Skip Sempe. The world famous ensemble will present pieces from the album "Terpischore" by the acclaimed German composer Michael Preatorius as well as the joyful and colorful dance music of Renaissance.

Founded in 1945 in the former Soviet Union, the Borodin Quartet has received critical acclaim for its chamber music over the past 60 years. The string quartet will introduce the finest examples of classical music on Nov. 8.

As a part of her latest album tour, American jazz singer Dianne Reeves will take the stage at CRR on Nov. 5. She has released her newest album "Beautiful Life" after a five-year break. Reeves' debut album was released in 1977 and is recognized as the only jazz singer whose three successive albums were awarded with the Grammy Award for "Best Jazz Vocal Performance." She worked with legendary producer Arif Mardin for her Grammy-winning album "A Little Moonlight." She has performed at Jazz at Lincoln Center under the artistic directorship of Wynton Marsalis and has performed with the Chicago Symphony Orchestra under the conductorship of Daniel Barenboim as well as the Berlin Philharmonic Orchestra under the conductorship of Sir Simon Rattle. Reeves will be accompanied by Peter Marion on piano, Romero Lubambo on guitar, Reginald Veal on contrabass and Terreon Gully on the drums. The concert week will close with a performance by the Turkish Folk Music Society of the Istanbul Metropolitan Municipality City Orchestra under the conductorship of Fatih Yener on Nov. 9.