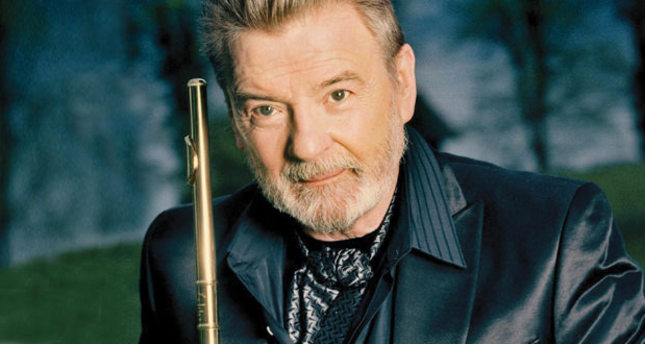 by daily sabah
Nov 20, 2014 12:00 am
Regarded as the best flautist of his generation by world-renowned flute virtuoso Sir James Galway, Bülent Evcil will perform in Antalya, Istanbul and İzmir and enchant classical music lovers across Turkey. He will perform along with the Antalya State Symphony Orchestra and Mozart Flute and Harp Concerto on Nov. 28 in Antalya. On Dec. 5, he will perform at Cemal Reşit Rey Concert Hall within the scope of the "Magical Journey in Music through Flute and Harp" project. Evcil will perform another concert at the Concert Hall of Notre Dame de Sion High School on Dec 6, and he will be accompanied by Istanbul's Orchestra' Sion at both performances. Two days later, on Dec. 8, Evcil and well-known pianist Philip Moll will perform at the İzmir Ahmet Adnan Saygun Concert Hall.

Evcil began his flute education at the State Conservatoire of Mimar Sinan University in 1980 and continued his education at the Royal Conservatory of Brussels and Heidelberg-Mannheim Music Academy. In 1992, he won the "Best Overall Performer" Award at the James Galway International Flute Seminar in Dublin, providing him with the opportunity to become the student of Sir James Galway. Evcil worked as the chief flautist with the Istanbul Opera and Ballet from 2000-2005 and is currently the assistant chief flautist of the Istanbul State Symphony Orchestra and solo flautist of the Borusan Istanbul Philharmonic Orchestra. The artist also performs as a solo flautist and first flautist with international orchestras around the world, including the Arturo Toscanini Philharmonic, conducted by Lorin Maazel, the Italian International Symphony Orchestra and the Sao Paulo State Symphony Orchestra. Evcil has taken part in many international and local concerts and music festivals. He participated in the American-based National Flute Association's (NFA) concerts in San Diego, California and New York. He performed in recitals at the Italian International Flute Festival (Falaut) in Milan, the British Flute Society Festival in Manchester and the prestigious German Flute Festival in 2013. The flautist has also appeared on stages in France, Slovenia, Serbia and Kosovo. He has worked with recognized maestros of the world including Lorin Mazel, A. Rahbari, I. Oistrakh, E. Tabakov, I. Marin, G. Aykal, T. Strugala, C. Scimone, Fazıl Say, Richard Galliano, B. Fromanger, D. Formisano, M. Grauwels, R. Trevisani, L. Kretzer, P. Moll and A. Oliva. In 2004, he performed in the Turkish premiere of J. Rodrigo's "Concierto Pastoral" along with the Istanbul, Adana and İzmir state symphony orchestras. Experts recognize this concerto as the most difficult flute concerto of all time. The artist has also released two albums, "Tango Zamanı" (It is Time for Tango) on the Kalan Music label and "Ortadoğu Minyatürleri" (Miniatures of the Middle East) on the A. K Music label. Evcil works hard to increase the popularity of flute in Turkey and has received a Royal Belgium Encouragement Medal of Art for his work.