Maher Zain singing for all 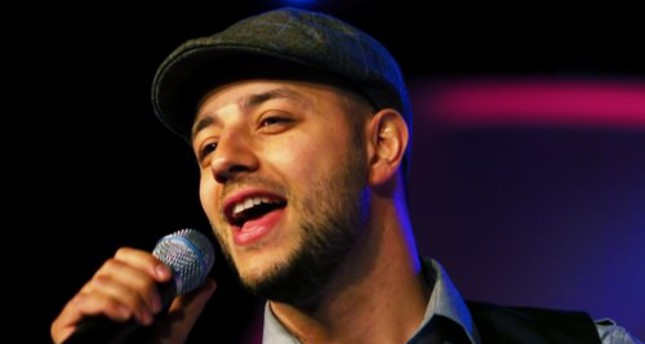 by Özlem Sakin Dec 05, 2014 12:00 am
The Swedish-Lebanese R&B singer performed at the event of Independent Industrialists and Businessmen's Association (MÜSİAD) on 26 Dec. MÜSİAD president, Nail Olpak, presented a gift to the singer without forgetting to mention that President Recep Tayyip Erdoğan is also a fan. In response, Zain, singer, songwriter and producer, thanked the president for his kind words and Olpak for the gift. Zain, who rose to fame with his debut album "Thank You Allah," gave his performance in English, Arabic and Turkish. As one of the most famous Muslim artists, Zain frequently visits Turkey and has performed in many cities from Bursa in the northwest Turkey to Şanlıurfa in the southeast. Daily Sabah caught up with Zain to discuss everything from his future projects to growing up in the Western world as a Muslim.

Daily Sabah: How was your concert in Istanbul and how did you find the city and the audience?

Maher Zain: It was a great concert. It is always a pleasure to be back in Turkey performing in front of such great fans. As usual, they didn't fail to surprise me with their great energy and by singing along to all the songs with me, even the Arabic and English ones.

DS: Music has always been your passion. Can you tell us a bit about how it all started, seeing that you studied something completely different in college? Who was your biggest influence?

MZ: My musical journey started as a student when I met some friends who were interested in music too. We met together and started playing music, composing, rapping and so on. Soon enough, I was introduced to a person called Red One, who is now known as one of the top producers in the business. What he taught me has really been invaluable.

DS: You spent some time in America and I believe your lifestyle was different there. Why did you decide to leave such a successful career in America and go back to Sweden?

MZ: When I moved to New York with Red One and started working at a professional level, I soon began to realize that I was in love with the music and the crew, but not with the lifestyle itself. I started questioning everything and started thinking about my purpose in life. That was when I finally decided to leave my job for good. But I met the brothers from Awakening in Sweden and we decided to collaborate, and that's when we produced my first album "Thank you Allah."

DS: As a Muslim who was raised in the West, what kind of difficulties have you faced?

MZ: There were times when I was very far from Islam and the Islamic way of life, when I felt I was very far from Allah, even though he was always close to me, protecting me, giving me signs and opportunities to change. As a Muslim raised in the West, I struggled with my identity and took the wrong paths.

DS: You took a break from your musical career for a while because of your religious beliefs. How and when did you decide to start making music again and blend your beliefs into your music?

MZ: That's true. It wasn't until I felt uncomfortable with the lifestyle of my musical career in the U.S. that I went back to Sweden and started to think more about my life. I visited masjids and I found answers to the questions going through my mind. I realized that Allah had gifted me with a talent I could not ignore. As a result, I started to think of redirecting my experience in the music field to something useful that has a message and which spreads beneficial thoughts.

DS: You have a huge following in various countries in the East and have sung in many languages. How do you relate to such diverse cultures? Is religion and culture the common ground?

DS: What part did your family play in your music career?

MZ: My father played a central role, as he was actually a singer as well. I used to go to his performances and listen to his songs when we were in Lebanon. His music was always a part of my life; he greatly encouraged me and even gave me my first keyboard when I was 8 years old.

DS: What do you think about Turkish culture and music? Do you have any favorite Turkish musicians? Are there any particular musicians you would like to work with in Turkey?

MZ: Turkish culture is one of my favorite cultures. I have been to Turkey many times now, and I love the country and its people, the food, the history and everything about the scenery. I listen to some Turkish singers such as Mustafa Ceceli - who is a wonderful person and a good friend of mine - İbrahim Tatlıses and many others, and I have many Turkish friends.

DS: What will be your next project? Will you be releasing any albums soon?

Zain: I am working on my third album now. Hopefully, it will be released by June 2015 [God willing].

DS: Who would you like to collaborate with the most in the future?