Behind the scenes with refugee musicians 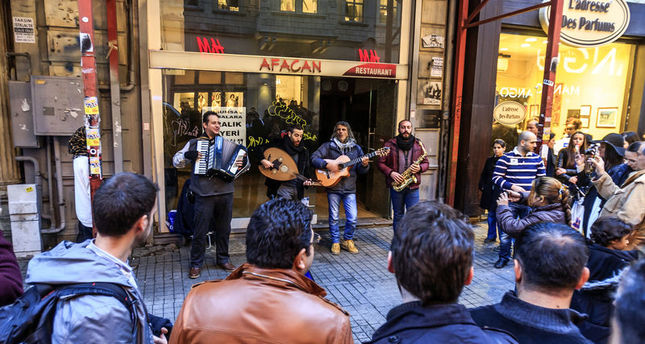 Since the war in Syria began, refugees have fled to nearby countries and struggle to make a living by any means possible. For one group of men, that means performing on the streets - photo by Recai Kömür

When Khaled Al-Halaby started performing on the streets, he would hide behind his accordion, look down and make sure no one saw him. Music is usually played with pride and excitement on the streets of Istanbul, but for Al-Halaby and Basel Khalil, a guitarist, it was a source of embarrassment that only added insult to injury.

Al-Halaby, 43, and Khalil, 51, are part of a street band that plays in Taksim on İstiklal Avenue – the avenue that never sleeps. Playing on the streets never had to be an option for the former music instructors in the past, but as Syrian refugees, it was their only choice to survive.

"I couldn't find any work here in Istanbul," Al-Halaby said, adding, "Here, Syrian music doesn't have an industry, and with the high living expenses, I needed to do something – anything."

With a fixed salary in Syria, he lived a comfortable life, but the situation took a 180-degree turn when he came to Turkey. "Here, during the day I don't work, I don't live."

Al-Halaby has taught music for over 15 years and Khalil has taught for over 20 years. Both men have performed in reputable venues with Syrian stars and celebrities. "After all I've done, all of a sudden, I'm on the streets? It was a huge emotional burden for me," Al-Halaby said.

Khalil, a renowned composer in the music industry in Syria, was not able to find a nerve in him that made it okay to play on the streets. For him, music had its prestige; it was only to be played onstage. "As Arabs, the idea of playing on the streets is something that people are ashamed of. It's nothing to be proud of. It's like you're begging for money, so it was very difficult for me," Khalil said.

For Orock Daoud and Mohammed Durgan, the other two musicians that complete the band, playing on the streets was never a humiliating experience. As Daoud is 24 years old and Durgan just two years older, the age difference between them and their elder colleagues may explain the disparity in their mindsets.

"I'm sure it was much more difficult for Khaled and Basel to play on the streets," Daoud said. "They were professors. As for me, I just came out of school and was excited to play with them."

The group, that named themselves Domsek, which translates to Damascus in the classical Syriac language, have only been together for four months, yet they seem to be inseparable. Fastened together by the atrocities they witnessed back home, they have now become a family that uses music as a form of escape. From losing a 15-year-old brother in a regime-operated prison, to being conscripted to join the Syrian army, the conditions in Syria forced the four men to leave with nothing but the instruments in their bags and hope in their pockets.

Despite the effect of political turmoil on their lives, they consider themselves musicians, not politicians. "We never bring politics into our music," Khalil emphasized, and added, "It's just a game, and we're always being played with. We simply don't want to play." The closest Domsek gets to politics is when it plays songs that call for Arab unity, as their music ranges from Lebanese and Syrian to Egyptian classics. The striking similarity between Turkish and Arabic music often tricks the ear, so playing classical Ottoman music is always an option for them, though they do not speak the language.

Daoud, who has been in Turkey for two years, learned Turkish after falling in love with someone who he describes as "a lovely young lady" named Aysu. Meanwhile, Khalil is purposely avoiding learning the language. "I'm trying my best not to learn Turkish. I don't see a future here for myself or for my family from how hard it is to make a living. I hope to one day return to Syria." For him, music is a universal language and that is all he needs wherever life takes him.

For the rest of the group, who plan on staying in Turkey for some time, the band is all they have. In an attempt to have Domsek's voice heard, they are all working on an album with two new original songs that will be released next year. The album is not just for the group to gain fame or recognition, but so they do not have to carry the burden of whether they will make enough each day simply to live.

Domsek is one of the top bands in Taksim, but as their fans cheer them on, the municipal police officers constantly kick them out. The group has attempted to obtain a license to be eligible to play on the streets, but when they spoke to the municipal officials, they found themselves in a never-ending cycle. The officials said that it is not allowed, but it is also not forbidden. "We tried to abide by the laws and they're not really helping. They need to realize that when they stop us, they stop our only source of income. They stop four families' supply," Daoud said.

The four musicians sing and play on the streets for nine hours each day and night in rain or shine, leaving little or no time for spending time with their family. If not playing music, Al-Halaby, who lives two hours away from Istanbul, spends most of his time traveling between home and Taksim. "I barely see my children. But there's not much I can do since I need to make sure I'm providing for them," he said. Having worked seven days a week for the past few months, the group decided to take Sundays off to spend time with their loved ones, even if it may hurt them financially.

It took the group some time to get comfortable performing on the streets, but after a while, it has become a source of joy. "If we ever become a well-known group, I don't think we'll stop playing on the streets," Khalil said, who was completely against the idea at first. "You're not on stage, very far from the audience; you're a part of them, and that gives you so much energy as a musician," he added.

Domsek fits into a mosaic of street musicians that play in Taksim who do not compete, but complete each other. A walk through Taksim is a walk through different cultures and their music. Aside from making a living, Domsek also plays in hope of clearing up any misconceptions that Syrians do not have a musical culture. "We're sharing our heritage. It's an amazing feeling knowing that I contribute to the smiles on people's faces each day," Durgan said.

The men are hopeful for Syria's future, although they are aware it may be some time until they can return to the place they call home. For Khalil, "The violence will end, but the music will remain."