Morrissey in Turkey: 'Istanbul, I love you!' 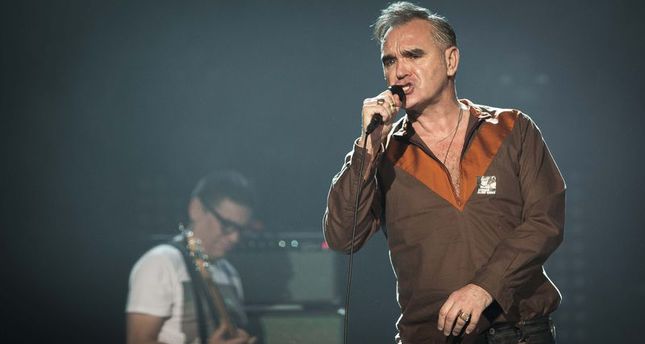 The Smiths are dead and their unfathomable, undeniable frontman is performing solo for the first time. His audience is overwhelmingly English and male, and from their ranks, his name is flung aloft to the tune of the football terraces' "'Ere We Go."

The slender Mancunian, with a new backing band behind him, grabs the mike and...

Morrissey in 2014-if not quite kitsch or retro-can be something of a niche enthusiasm.

The times when the lofty one's caustic barbs against U.K. prime ministers or the monarchy would be greeted with gleeful condemnation by the tabloid press are largely gone.

Morrissey has become-perhaps not quite to his chagrin - a national institution, much like the faded (mostly deceased) British stars of stage and screen with which he clearly feels an otherworldly kinship.

The legendary contrarian may be an unlikely hit in Turkey but taking to the stage on Wednesday night in Istanbul's Volkswagen Arena (purged of kofte sellers and other meat peddlers for the night by the high-profile vegetarian) Morrissey is loudly and happily greeted by thousands of Turks.

Opening with a brisk "Merhaba!" to the crowd and a furious version of The Smiths' classic "The Queen Is Dead," it is clear that Morrissey - recovering from cancer treatment over the last 18 months - still commands an arresting stage presence.

Accompanied by veteran guitarist Boz Boorer and uniformed backing band, Morrissey is warmly welcomed by the youthful audience, which reacts well to a set list that leans heavily on his more recent songs rather than Smiths nostalgia or his 90s solo works.

At first, it can be hard to tell how much of Morrissey's persona and cultural shtick translates to a Turkish audience.

Songs about hanging out with boxers and gangsters from London's East End, about how meat is murder (with punishing animal cruelty video) or on wasting your life away in the damp dreariness of rundown English seaside towns do not strike as being typical subject matter for Turkish popular culture.

But they love it. They do. The roof lifts off for Morrissey's rendition of "Istanbul"-a tale of romanticized child poverty on the streets of the tough-but-magnificent metropolis.

Pausing at one point to tell the crowd: "Yes, you can whistle," Morrissey is greeted by a deafening wall of shrill noise, making the arena sound like the last 30 seconds of a Galatasaray-Fenerbahce derby with one team up 1-0.

Turkey is a land of song. Many music channels here are awash with hours of earnest men and women belting out sentimental ballads of love and loss. And Morrissey, filtered through the watery prism of 1980s Manchester, is perhaps not that far removed from this tradition.

He is the show-flailing his microphone lead, reaching down to touch hands with fans. It is the aging, but vim, Stephen Patrick Morrissey who (like our Turkish balladeers) makes the stage his own and sings his life of isolation, of wanting, of being "hated for loving."

And like Morrissey gigs all over, the die-hards are at the front, hurling bunches of flowers and gifts with at least three people clambering onstage for an embrace, needing to be almost chiseled off the 55-year-old singer by security.

The presence of Morrissey's recent poor health lurks behind the crashing guitars and thundering drums. A subtle switch in the lyrics of "How Soon Is Now" from "all my hope is gone" to "all my life is gone" is a sobering moment, as is his performance of the brooding lullaby "Sing Me To Sleep," which sees the singer silhouetted under a single spotlight-the crowd's non-stop whistling suddenly subdued.

It is easy to preach to the converted, but that Morrissey - awash with awkwardness, Englishness, his 80s hatreds for Margaret Thatcher and the royal family - manages to generate real adoration from such diverse fan bases-including those here on the edge of Anatolia-says one thing: the man remains a class act.

Departing after an encore of "Everyday Is Like Sunday," the bare-chested Morrissey tells the roaring crowd: "Istanbul, I love you!"-and Istanbul loves him right back.