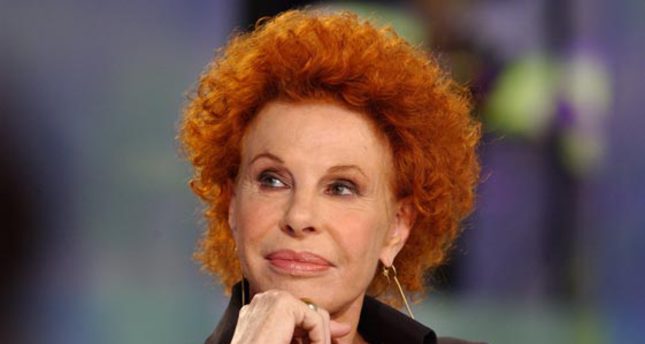 Ornella Vanoni, an Italian diva celebrating her 80th birthday, is coming to Istanbul with her pet dog and insists on staying by the Bosporus. Vanoni will be giving her first concert in Turkey at İş Sanat on Jan. 27

Ornella Vanoni, an artist who brought sophistication to Italian Pop music, first began her career as an actress by taking to the stage in theaters in 1960. In the days when Vanoni became popular with her folk songs and popular compositions all interpreted in her own unique style, she was known as the "Cantante della mala" (singer of the underworld) as she sang songs about stories of the underworld.

Vanoni made her first breakthrough in 1963 with the unforgettable songs "Senza Fine" and "Che cosa c'è" written by Gino Paoli, and after being awarded first prize at the Neapolitan Song Festival she added to her fame with the awards she won in various song contests such as San Remo. With one hit after another she succeeded in becoming an Italian Pop diva.

She strengthened her fame with the songs "Una ragione di più," "Un'ora sola ti vorrei" and "L'appuntamento," and now Vanoni prepares to give her first concert in Turkey as a Mediterranean legend with emotional, sophisticated and timeless songs. Vanoni's songs have been sung in Turkish by great names such as Ajda Pekkan and Nükhet Duru, and she is known by the world of Italian Pop as the "First Lady."

When her famous song "L'Appuntamento" of the 1970s was used on the soundtrack of the Hollywood film "Ocean's Twelve," Vanoni experienced another wave of fame, and her song "Perduto," which became famous in 2009, became the number one song on the iTunes chart and one of the most frequently played songs on radio. We discussed her emotional songs, the names she has worked with and the Bosporus she once explored with Gianni Versace and became very fond of this Italian diva that just celebrated her 80th birthday.

l Although you were on stage in theater as an actress, what was the first step towards making your career shine as a singer?

O.V: As we were performing on stage with Giorgio Strehler in Milan at the Piccolo Theater, I had already entered the world of music as I began, on the other hand, to sing pop songs with very different arrangements in the same period. However I can say that the thing that truly drew my career in another direction was, without doubt, meeting Gino Paoli.

l After having met Gino Paoli, you began to sign your name to great hits such as "Senza Fine." What was your secret to the success of your musical partnership?

O.V: Gino Paoli particularly left the choice of music to me, and I believe we were truly able to produce a quality of arrangement of music far above that of the period's pop music. Also as a singer, I believe I provided a sophisticated stance to the listener as a result of my theater background, which provided me with a degree of elegance and a clear advantage.

l Can we say you prefer singing to acting?

O.V: As I said, I believe my background in the theater poses a great advantage for me when I am on stage. Also, for a long period of time, I was able to continue both as a singer and an actor; however for me, singing turned into a far deeper passion and still today my biggest passion is to sing to beautiful melodies with beautiful words.

l Almost all of your famous songs are particularly emotional. Are you an emotional woman in your everyday life?

O.V: Indeed, you can consider me to be a very emotional woman. In particular, I truly can't deal with the poverty I see on the streets. I can say that I am very sensitive to what goes on in the world every day and what we see in the news. I can say that I can barely tolerate the news. The sensibility in my songs doesn't just belong to me; I am very lucky to have met great Italian singers and songwriters such as Gino Paoli, Luigi Tenco and Fabrizio De Andrè.

l Since the early days of your career, what have you particularly taken care of when choosing your songs?

O.V: In the first periods of my career when I worked with Gina Paoli and in the later periods when I met with musicians from Brazil, I not only took the harmony and tone of songs into consideration but also their words because it was always important for me that the songs I sang to express myself were compatible with my soul. On many occasions, in cases where there was no harmony between the words and the music of a song, we changed the lyrics. I never chose a song that I didn't feel as I sang it.

l Critics refer to your music as sophisticated Italian Pop; how would you define your music?

O.V: When I define my music I prefer to avoid squeezing them all into a single type and prefer to refer to them as beautiful melodies and nice words because I have always taken great care to choose beautiful melodies for my repertoire. When I worked with Gina Paoli and in the period when I met Brazilian musicians, we always chose nice melodies; however, I particularly prefer Brazilian music like the Bossa Nova, which is closer to jazz. If the tone is close to that of jazz and the words are in harmony with the music, this has always attracted me to a song.

l Turkish versions of your songs have been sung by our pop stars. Would you like to sing a song with Turkish lyrics?

O.V: I don't really have an idea about music in Turkey; I don't really know your pop stars very well, but why not? I always love to sing songs with beautiful melodies, and in particular if they have good lyrics I would definitely like to learn them.

l You will be giving your first concert in Turkey on Jan. 27 in Istanbul. Have you ever been to Turkey before?

O.V: This will be the first time that I will be giving a concert in Istanbul. However, we came to Istanbul once before to tour on a boat with my friends. Istanbul and the Bosporus were enchanting. We visited with Gianni Versace and became particularly fond of the Bosporus. In fact, we also visited Pamukkale and Cappadocia. The memories that are most strong in my mind were that of the Bosporus and the famous jewel I saw at your palace. (When I asked whether she was referring to the emerald at the Topkapı Palace, she said, "Yes, yes, Topkapı Palace.")