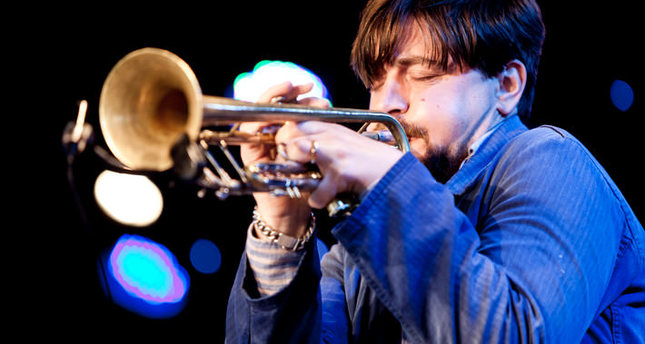 by Zeynep Esra İstanbullu Jan 06, 2015 12:00 am
Goran Kajfes, one of the most important names of Swedish jazz, and his band, Goran Kajfes Subtropic Arkestra, will perform on Jan. 14, at 8:00 p.m. at Akbank Sanat. Kajfes topped the album lists for a long time in Scandinavian countries and Central Europe with his 2013 album, "The Reason Why Vol. 1," opening with a cover version of Turkish singer Edip Akbayram's "Yakar İnceden İnceden" (It Burns Deeply). His band frequently uses Latin American rhythms along with German progressive jazz and rock melodies. Recently, he released "The Reason Why Vol. 2," and will visit Istanbul as part of his world tour. Kajfes will reinterpret the music of Edip Akbayram, Francis Bebey, Grizzly Bear, Cluster, Milton Nascimento and Tame Impala. On the day of the concert, he will answer questions from fans at a workshop at 5:00 p.m.

Coming from a musical, Croatian-origin family, Kajfes grew up in Sweden and has shared the stage with many prestigious names such as Sting, Eagle-Eye Cherry, Janet Jackson, Jose Gonzales, Stina Nordenstam, Lester Bowie, The Soundtrack of Our Lives and the Cardigans. He is also a permanent member of different bands including Goran Kajfes Subtropic Arkestra, Oddjob, Navcka Forum, Angles, Fire! Orchestra and Magnus Carlson & The Moon Ray Quintet. In the last five years, he has become famous not only in Sweden, but around Europe. The album "Clint" released in 2010 with the group Oddjob, was awarded the Year's Best Jazz Album by the Sunday Times. One year later, his solo album "X/Y" cut in 2011 received the Year's Best Jazz Album at the Nordic Music Price Awards, beating Björk, Lykke Li and Ane Brun. "The Reason Why Vol. 1" was released in 2013, and aside from Akbayram's song, the album features Latin American rhythms and German progressive jazz and rock melodies. His work has received critical acclaim by popular jazz music websites such as Bird is the Worm, HiFi +, Jazzwise, and Emusic. He has been described as a musician whose new perspective on jazz music should be discovered by British HiFi +, which called the album one of the year's most impressive hits.