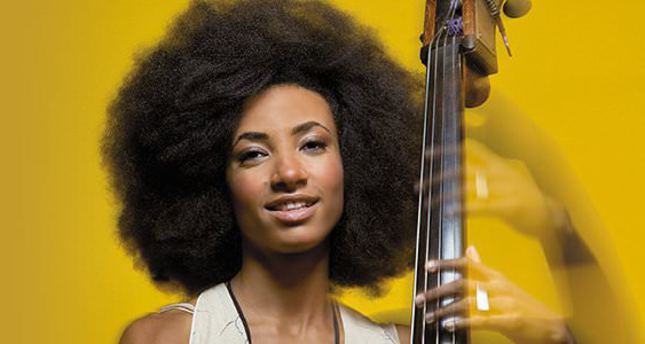 by Cenk Erdem Jan 10, 2015 12:00 am
The youngest superstar of jazz and four-time Grammy Award-winning artist Esperanza Spalding will be 2015's first awarded guest of the Second CRR Jazz February Concert Series. Following the opening concert of Aziza Mustafa Zadeh, also known as the "Jazz Princess of Baku," on Feb. 1, Spalding - U.S. President Obama's favorite jazz artist - will perform on Feb. 3 in Istanbul. Music critics regard a young bass virtuoso, composer and singer as the artist who has made jazz popular again. Spalding became the shining star of jazz in recent years with her radio-friendly jazz album "Radio Music Society." The first time I saw the artist in concert was at the 19th Istanbul Jazz Festival and I am certainly looking forward to CRR Jazz February. Spalding, who sings in Spanish and Portuguese in addition to English, caused a stir among music circles and put her stamp on music history when she won the "Best New Artist" award at the 53rd Grammy Awards in 2011 with her third studio album "Chamber Music Society," as she was the first jazz musician to win this award. The shining star of jazz, who trumped pop phenomenon Justin Bieber and his fans - humorously called "Beliebers" - by winning the Grammy, also won the "Best Jazz Artist" Award at the Boston Music Awards the same year.

Acclaimed by the music critics as one of the most talented students of the prominent Berklee Collage of Music, Spalding currently gives lessons at her former school, becoming the youngest lecturer in Berklee's history. With the sales of "Radio Music Society" sky rocketing, the superstar of jazz arouses great interest for the genre. Standing out with her live performances, Spalding has performed at some of the biggest events in the world from the 84th Academy Awards ceremony to the 2009 Nobel Peace Prize ceremony. She also collaborated with many music legends such as Milton Nascimento, Jack Dejohnette, George Duke, Janelle Monae, Herbie Hancock, Prince and Wayne Shorter. She participated in a project titled "We are America" in 2013 with many musicians, including Stevie Wonder and Harry Belafonte, to protest the Guantanamo Bay prison camp, which has been used as a prison by the U.S. for counterterrorism since 2002. Apart from this, she also recorded an incredible duet with Bruno Mars titled "Old & Crazy" on his Grammy award-winning 2013 album "Unorthodox Juke Box." It is beyond doubt that Spalding's performance at CRR will be the jazz gift of the year.