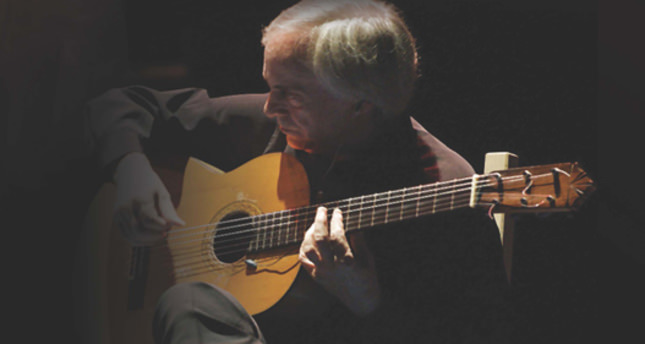 İş Sanat, which has become a center for art and culture by hosting exquisite concerts, orchestras and exclusive projects, once more presents must-see events

Get ready for a February full of art with actor Halit Ergenç and the Cinema Symphony Orchestra's highly anticipated concert, legendary Paco Pena's "Flamencura" and Ozan Musluoğlu's "My Best Friends Are Vocalists" projects, along with concerts by Ravi Coltrane, the Chiaroscuro Quartet, Akademie Für Alte Musik Berlin and Jean-Guihen Queyras.

With a career spanning more than four decades, Paco Pena is regarded as one of the foremost flamenco guitarists and composers of our time. For many years, he has continued to win the hearts of his audiences with his groundbreaking performances that reveal the true soul of flamenco. Pena, who builds his shows inventively on the deep foundations of flamenco, is constantly renovating this lively Spanish art form. Embodying flamenco's originality and innovation, he continues to explore the boundaries of flamenco with his imagination, devotion and skill. Pena performs regularly with his own hand-picked company of dancers, guitarists and singers at venues such as the Royal Festival Hall, Sadler's Wells Theatre and the Barbican in London, as well as festivals around the world including Edinburgh, Adelaide, Amsterdam, Athens, Israel, Istanbul, Singapore and Hong Kong. He will give a concert on Feb. 12 with his project "Flamencura" whose world premier took place in April 2013.

Jazz artist, composer and bassist Ozan Musluoğlu will fill the stage of İş Sanat with superstars. Musluoğlu came together with 12 different vocalists for his latest album, "My Best Friends Are Vocalists," which offers 12 very colorful and pleasant tracks that encompass 12 different worlds. Four of the tracks were composed by Musluoğlu, and three of the lyrics were written by the vocalists. The album's powerful line-up features 28 musicians. Having performed with these musicians at different venues and times, Musluoğulu will perform with them again at İş Sanat on Feb. 17, which will surely be a night full of heart-warming sounds.

İş Sanat will present a surprise concert in Istanbul during the upcoming month. Actor Halit Ergenç, who is well-known in Turkey as well as abroad for his cinema and television projects, especially in his role as Sultan Suleiman in the series "Muhteşem Yüzyıl" (The Magnificent Century), will perform a wide range of repertoire from classic musicals to popular film soundtracks at İş Sanat. A graduate from Mimar Sinan Fine Arts University, Ergenç has taken part in significant musical, opera and ballet projects including "The Adventures of ZAK-New York," "Kiss Me Kate," "Sweet Charity," "Amphitryon," "Evita: Ghost and the Others" and "What if the Songs Stop." He will be accompanied by the Cinema Symphony Orchestra, which is a one-of-a-kind project in Turkey, with maestro Serdar Yalçın on the stage. This special orchestra is a unique ensemble with a repertoire of film soundtracks and musicals. Halit Ergenç and the Cinema Symphony Orchestra will create a journey through the magical world of the silver screen on Feb. 6.

The young musician Poyraz Baltacıgil will be the guest of İş Sanat's Shining Stars program this February. The artist, who began his cello education with Hakkı Öztürk at the Istanbul University State Conservatory in 2000, has continued his education with Dilbağ Tokay at Mimar Sinan Fine Arts University State Conservatory since 2005. Baltacıgil has worked with prominent cellists such as Yo-Yo Ma, Alexander Rudin, Natalia Gutman and Steven Isserlis. He made his orchestral solo debut at the age of 13 with the Filarmonia Orchestra under the baton of Hakan Şensoy and claimed third place at the International Competition "Young Virtuosos" that was held in Bulgaria in 2011, and won first prize at the Benyamin Sönmez National Cello Competition three years later. He will perform compositions from Debussy, Schumann, Rachmaninov and Beethoven on Feb. 24 at the Millî Reasürans Concert Hall. There will be no admission fee.

A journey to the classical period with the Chiaroscuro Quartet

Composed of a Russian and a Spanish violinist, a Swedish violist and a French cellist, the Chiaroscuro Quartet is a young and dynamic ensemble that performs music from the classical period with a historical approach. Founded in 2005, the quartet uses gut strings for their instruments and is hailed by European audiences for their spirit. The Chiaroscuro Quartet was granted a Förderpreis Award by the German radio station Deutschlandfunk and will be at İş Sanat on Feb. 19, with their rarefied vibratos and pure performance to revive the classical spirit.

Saxophonist Ravi Coltrane's first concert in Turkey that was postponed due to the tragic mine accident in Soma last year will take place on Feb 27. He is the son of legendary saxophonist John Coltrane and jazz pianist and composer Alice Coltrane, and was named after sitar master Ravi Shankar. A composer, bandleader and producer, Coltrane is a sophisticated musician who wrote his name with golden letters in the tome of music history. Following his 2005 Grammy-nominated album "In Flux," he secured his position in the music industry as an innovative jazz musician with his album "Blending Times." During his first concert in Turkey, Coltrane will perform songs from his latest album, "Spirit Fiction," as well as other popular tracks.

Akademie für Alte Musik Berlin, a world-renowned German period instrument ensemble will come to Istanbul for the second time after five years at İş Sanat. Regarded as one of the best chamber orchestras in the world, Akademie für Alte Musik Berlin, also known as Akamus, will perform with conductor and concertmaster Georg Kallweit who has won many international awards, with over 60 recordings with the orchestra. French cellist Jean-Guihen Queyras with whom Akamus recorded Vivaldi's concertos in 2011 will be the soloist of the concert. Queyras, who displays an incredible diversity and has great integrity with his instrument, has enjoyed a dazzling career as a chamber musician and recitalist. On Feb. 10, Akamus and Queyras will perform compositions by Vivaldi and Caldara at İş Sanat.