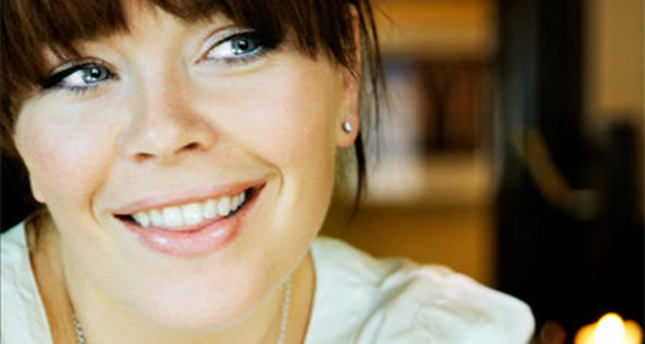 by Zeynep Esra İstanbullu Jan 22, 2015 12:00 am
Renowned Norwegian jazz vocalist Solveig Slettahjell, who is acclaimed for her emotional songs, will take the stage on Jan. 28 at Akbank Sanat as part of her world tour to introduce her album "Arven," recorded in collaboration with expert pianist Tord Gustavsen, Sjur Miljeteig and Nils Okland in 2013. The artist will be accompanied by pianist Morten Qvenild on stage and offer an unforgettable musical experience to Istanbulites. Slettahjell was born in Oslo in 1971. The vocalist, who began accompanying choirs with her voice and piano at the age of 7, received her musical degree from the Norwegian Academy of Music between 1992 and 2000 and worked with well-known vocalist Sidsel Endersen. Slettahjell recorded five studio albums with her ensemble called "Slow Motion Orchestra" and recorded an album entitled "Natt i Betlehem" with trumpet player Sjur Miljeteig following a concert where she shared the stage with Norwegian pianist Tord Gustavsen. She founded the Slettahjell/Hartberg Duo with pianist Hakon Hartberg. In 1995, the jazz musicians joined a band called Squid, which worked with their own original material based on soul, acid-jazz, and funk music, recording one album, "Super," in 1998. While she was still working with Squid, she teamed up with Norwegian experimental vocal band "Kvitretten" in 1997 and recorded two albums "Everything turns" (1999) and "Kloden er en snurrebass som snurrer oss" (2002), respectively. Slettahjell also toured Finland, Germany, Sweden and Norway with the band. Among some of the awards that Slettahjell has taken home, the Spellemanpreisen (2004), the Radka Tonef Memorial Award (2005), the Kongsberg Jazz Award (2005) and the Gammleng-prisen Award (2011) stand out.