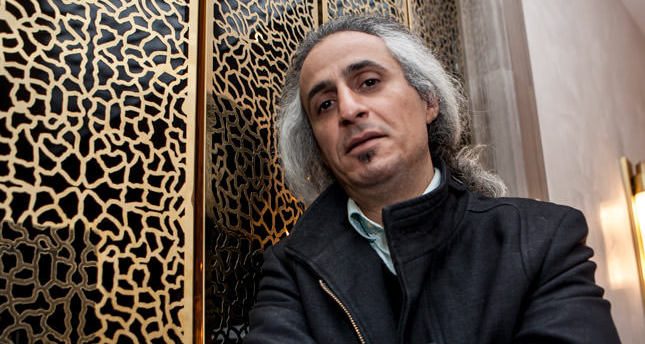 Described as "Iran's Bob Dylan" by the New York Times, legendary Iranian musician Mohsen Namjoo took the stage at Ankara's Congresium on Jan. 28 and Istanbul's Congress Center on Jan. 30. Having a large fan base in Turkey, the Iranian musician's concerts were highly anticipated events both in Ankara and Istanbul.

Born in the city of Torbet Jam in Iran's Khorasan Province in 1976, the artist, whose talent was discovered by Nasrollah Nasehpour, received his bachelor's degree in drama at the University of Tehran and completed his master's in music. Namjoo, who can use his voice as an instrument, thanks to his four octave vocal range, can play the setar, a traditional Iranian instrument, and uses Iranian literature as the source of inspiration for his lyrics. His most popular songs for his Turkish audience are "Nobahari" and "Ey Sareban." Daily Sabah conducted an interview with him.

Daily Sabah: You were born in Iran in a traditional family. Did they support your desire to become a musician?

Mohsen Namjoo: They were traditional, but they were supportive in literature and art because my brother was, he is, a calligrapher, and he lives in Tehran now. One of my sisters also teaches animation at a university. But because I was the youngest, my mom, in particular, had many dreams for me, such as becoming a doctor or engineer. When I was a teenager, they supported me, enabling me to take private music classes. But they did not know it was going to be my job. That is why I had some problems. My brother was the only one in my family who supported me.

DS: You received your first support in music from Nasrollah Nasehpour. And then you went to conservatory and received a folk music education. How did your teachers affect your choice of music?

MN: The best teacher have ever had was Nasrollah Nasehpour. He was originally a Turk from Tabriz. He was not a famous singer, but he was really a brilliant teacher. I learned everything about the traditional style of singing from him for four years. After that, I had some teachers at university, but I cannot really call them my teachers, because I had a rebellious character and was trying hard to do my own job in music, which they did not like. Especially as a student, I was now allowed to do this.

DS: You played setar because you had to play an instrument, and you chose it because it was not expensive?

MN: I have never been interested in playing any kind of instruments. I love composing and also singing. I have always thought that I am not talented enough to play instruments.

DS: Did you continue to play setar?

DS: You made music for some plays and appeared in the film "A Few Kilograms of Dates for a Funeral." How are you related to cinema and theater?

MN: My grades in the university exam were good. There were two departments: music and theater. But music classes were going to open a year later because there was a preparation year. I had one year free, and that is why I went to the second, the theater department. But just for one semester. It changed my whole life. It influenced my music, my lifestyle, my friends and my relationships. And theater and cinema just came to me. I was already a big fan of cinema. I was looking for all the grand masters in cinema. I got many friends in the field of cinema. Acting, directing... They liked me as a composer for theaters. Sometimes, I was acting, rehearsing. Not on stage, just to amuse myself. But when I started this career in music, I mean mixing music, I developed a theatrical approach and was influenced by cinema. After "A Few Kilograms of Dates," I had a second experience in cinema a few months ago. It is going to be released next year. I also took part in two theater projects in California: as a narrator once and also a play-reader.

DS: Persian literature is broad and rich. In what ways does it feed your art? For instance, do you write poems apart from your music, as another hobby?

M.N: I write some things but I cannot call myself a poet. I think the only field of culture and art for which we Iranians are really proud is poetry. We can name some honors in architecture, calligraphy or old paintings, though. Music always was underground. Different kinds of systems have their problems. The Iranian Islamic era has problems with music. That is why we have many gaps and broken lines in history. The only thing we were continuously talented at was poetry. Also, after the 20th century, we had brilliant poets. But for music, we don't have that much. You can name some theoreticians; some of them had to emigrate. I am not a poet, but I am definitely influenced by poetry because literature is much bigger than Iranian music.

DS: Maybe that is what compelled you to make a mixture of music with the Western style?

MN: Many musicians from my generation have done this. They tried to mix Iranian music or Persian lyrics with Western styles. I think people became interested in my music because I sing in a traditional style or play setar, not electronic guitar. There is a famous quotation by a modern French philosopher, who I cannot remember now, who said, "The best way to be modern is to just step into tradition." The better you know tradition, the more you can be modern. Any kind of modernity has its base in tradition.

DS: A New York Times article defines you as "the Bob Dylan of Iran." How do you feel about that and how do you define and position your music?

MN: First of all, I am proud of being called this because Bob Dylan is a really huge maestro of the 20th century. But we are musically different. The author of that article in the New York Times was just talking about the protest style and the lyrics because Bob Dylan was an icon of protest. He had many ironies and jokes about the system. He was a critical person. The author was maybe comparing some of my lyrics, not just all of my lyrics. Only five percent of my lyrics are socially critical. Musically, my roots come from traditional Iran. It is not comparable to what Bob Dylan has been doing in the U.S. He is making country music. Yes, country music is traditionally American, but he is not mixing something with something else.

DS: You were sentenced to five years in jail in Iran on the claim that you ridiculed Quran verses by using them in music.

MN: I was lucky because it was after I had gone abroad. Before going abroad, the Iranian intelligence got me and asked me questions. They were kind to me because I explained my intention. I am not a Quran supporter, but I am not an insulter. I definitely do not insult religions. I told the inspector that for me, the Quran is beautiful poetry full of rhythms, full of sounds. It is a big, brilliant work of art. I was just trying to mix some elements of Western music and some elements from the Quran. On the one hand, we have great reciters like Abdul Basit Abd us-Samad. On the other side, we have some big names like Tom Wait and Roger Waters. We have here the Arabic language and English language. About the music, here we have Arabic scales, Turkish scales, Iranian scales and Eastern music. On the other hand, we have the blues. For me, it was just a process of researching to mix these elements with each other. Just imagine Roger Water singing these words. The inspector said: "Right now, we accept this. You have no idea what you are doing, but if you do it again or we find anything like this from you, you're going to be in trouble." The record was not public yet. But I think some other person found it and made it public to the court. They reopened the case again.

DS: You have been living abroad for six years. How do you deal with homesickness, and what are the difficulties?

M.N: Homesickness comes to everybody after one or two years away from home. I fought with the concept of "exile." There is something interesting about the Persian community. In California, everywhere is full of Iranians, and some of them cannot speak English even after 30 years because they don't need to. They have groceries, malls, lawyers, associations and everything. They can live in America without speaking English. That is why my and my wife's approach was to be involved with Americans. My wife asked to move to New York. It was not my idea; I was worried. After two-three months in New York, I said: "OK. If you are going to move from here, I am going to stay. This is my home."

DS: You said "exile." Did you have to move from Iran because of the sentence?

No, I did not move because of the sentence; I cannot go back because of it. If you are not at home, you are in exile. But New York is home to me, honestly. I have missed many things about Iran: my family first of all. My mom. She has got Alzheimer's, which is so sad. I miss my friends, but I don't miss the concept of Iran. I want to hang out with musicians, and I have more of them than in Iran. When you are living more comfortably in a place, that place is going to be your home.

DS: How did you find Turkish audience's interest in Ankara and Istanbul?

MN: I was really amazed because I make my music in New York, and the Persian community is a minority. Here for the first time, in a country other than Iran, I saw such a large number of people, and 90 percent of them were Turks. That is why it was a special experience for me. People do not understand the language but just came to share the music.

DS: What is your opinion of Turkish music?

MN: I first became familiar with Turkish music in 2009 when I saw "Crossing the Bridge" by Fatih Akın. Honestly, I was jealous. "Why don't we have something similar?" I thought. Fatih Akın's magic in that movie was that he was following his love. As a person raised in Germany, he was coming back to his original home to look for his love. Being non-Turkish, I was accompanying, following him. I learned love emotionally and educationally about Turkish music. I got some names from that movie. I am looking forward to having some time to make an album with Turkish musicians. Hopefully, next time we can talk in Turkish. Why not? I can take some classes in New York.