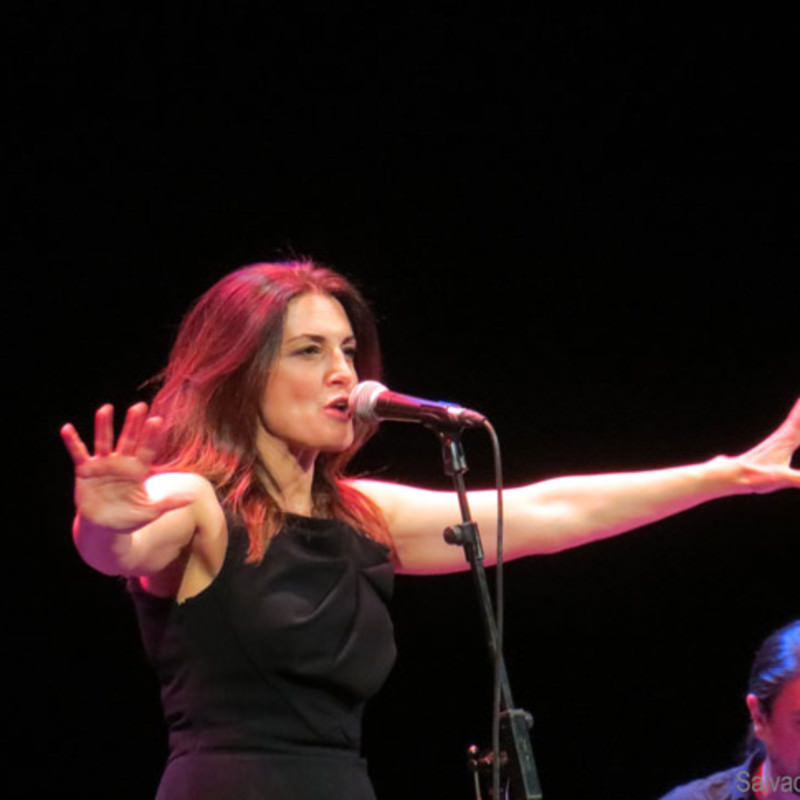 by Cenk Erdem
Feb 09, 2015 12:00 am
Molina Molina will welcome an eager Turkish audience by performing at the Council Hall of the Ministry of Education in Ankara on Feb. 21 for the first time. Molina showed her admiration for Turkey as well as Istanbul by gracing her best-of album, Autorretrato, with a cover photo featuring a view from the Bosphorus, and during the concert, she will perform tracks from her latest album "Mar Blanca," which she dedicated to her late father Antonia Molina, the legendary Spanish flamenco and folk music artist, along with her famous songs "Oh Amores," "Pequeno Fado" and "Ay Amor." We had the pleasure of conducting a lovely interview with the Spanish star, who provided insight into her life and career.

Daily Sabah: For many years, you have been selling as many albums as worldwide famous pop stars in Turkey. Can we say that Turkey holds a special place in your musical career?

Monica Molina: I can easily say that Turkey is one of the places that makes me feel loved. Additionally, I cannot help but admire the magic of the music that creates such a warm bond between the Turkish people and I. I always meet the members of Pasion Turca, which I have been working with for so many years, both in Turkey and Spain; we are like a family. I can say Turkey is like my second home after Spain.

DS: You will perform for your fans in Ankara on Feb. 21 for the first time. Do you think it will be a romantic night?

MM: I have a very strong and warm bond with Turkey and Turkish audience, so being with them always promises a romantic night. It will also be romantic for me since I will sing songs about love in Ankara. So, yes, I think it will be a romantic night, for the audience especially.

DS: The calm and peaceful Mediterranean atmosphere that you created with your first studio album "Tu Despedida" can be felt when you perform on the stage. Are you calm in your everyday life?

MM: Actually, my brother Noel is the influence behind my songs. He is a very meek, romantic and peaceful person. I am also a very calm and positive person, especially when it comes to my career. I had a very hard time during the first years of motherhood, but since my daughter Candela is like a friend to me now, I am more peaceful. Even going on vacation with Candela gives me peace.

DS: Looking back on your career, can we say that your 2001 album "Vuela" (I Fly) is the one that made you a star and brought you luck?

MM: Receiving a nomination at the Latin Grammy Awards in 2002 for my album "Vuela" was a pleasant surprise for me; however, my first album "Tu Despedida" was the very lucky break for my career. I was granted with the Golden Record Award for it and set off for my first world tour right after its release. After that, I joined Giraluna's tour and had the chance to share the stage both with the most special singer, Luis Eduardo Aute, and the famous flamenco artist Jose Merce. I was very lucky.

DS: Can we say that your latest album "Mar Blanca" in which you perform your father's songs is different from your previous works?

MM: Yes, my father's Spanish folk songs and the lyrics of the songs belonging to the '50s and '60s are very different from my works. While my brother was very sensitive as a producer as well as the son of Antonio Molina during the recording of the album, I was very melancholic and felt responsible for performing the songs as the daughter of a great artist. It is a different work in every aspect, but we tried to arrange the songs closer to my style as we record the album.

DS: Are there any surprises in your latest album?

MM: The biggest surprise is the black and white photo of my father and I that was shot in 1968. This is the first time that I share something so personal. Moreover, I recorded a duet with one of flamenco's biggest guitarists, Jose Antonio Rodriguez, in the song titled "Caminito del Olvido," which was a huge honor for me.

DS: So what is next?

MM: I was the face of two well-known brands in 2011. I get many offers and I feel like the commercials are an entertaining continuation of my acting career. I continue to record songs with my brother as well. I took a long break from my live performances, but now I am continuing from where I left. I am on stage again and the idea of visiting Turkey once again makes me feel good.