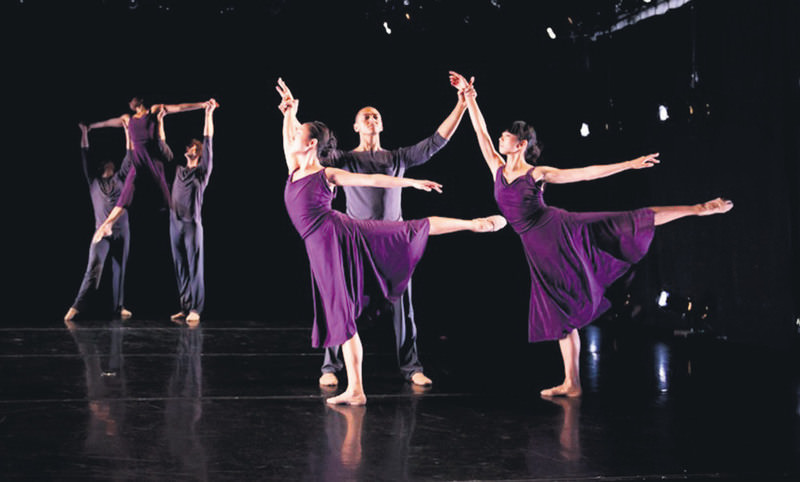 With spring around the corner, İş Sanat will enliven music enthusiasts with its rich program next month. From classical to jazz, the best music and dance performances will come to Istanbul soon

İş Sanat will continue to be the frequent destination of music lovers with exclusive concerts and events throughout April. The program, which will launch with Dulce Pontes, a rebellious artist of Fado (a traditional Portuguese musical style), will turn into a visual feast with Jessica Lang Dance Company's shows two nights in a row. Classical music lovers will meet one of the most talented accordion virtuosos of the new generation, Martynas Levickis, who will share the stage with Geneva Camerata. Art lovers will have a taste of good music with the joint concert of internationally recognized cellist Efe Baltacıgil and the acclaimed Philharmonia Quartet Berlin. Moreover, jazz devotees will have an opportunity to watch one of the most important trumpet players, Tom Harrell, and his quintet live on stage. While the poetry reading "Gün Olur, Alır Başımı Giderim" (One Day, I Will Walk Away), which is composed of Turkish poet Orhan Veli's poems, will be recited in memory of artist Müşfik Kenter who passed away in 2012, the children's play "Keloğlan" will be performed for the last time this season. Additionally, Ferhat Can Büyük will be the guest of Shining Stars series at Milli Reasürans Concert Hall.

Characterized as the "master of visual composition" by Dance Magazine, Jessica Lang and her company, which she brought together in 2011, has managed to quickly draw the attention of dance critics. Lang, who converts the language of classical ballet into contemporary choreographies, has collaborated with various ballet companies, including the Birmingham Royal Ballet, Japan National Ballet Company, Joffrey Ballet Company and Richmond Ballet, and produced more than 80 works. The Jessica Lang Dance Company has performed at sold out shows at the most prestigious venues around the world, and they will perform a special repertoire composed of their exclusive choreographies titled "Lines Cubed," "White," "Mendelssohn Incomplete," "The Calling," "Scape," "Aria" and "Among the Stars." Those who do not want to miss the critically acclaimed Jessica Lang Dance Company on stage, save the dates; they will perform on April 9 and April 10.

On April 17, Efe Baltacıgil, one of the most successful Turkish classical cellists, will perform with the Philharmonia Quartet Berlin, which has been hailed as "Four of the Best" by the British press. Highly praised by internationally-reputable violin virtuoso Yehudi Menuhin, the quartet was founded in 1984 by the principal concertmaster and the string section conductors of the Berlin Philharmonic Orchestra. The ensemble enchants the audience with its international concert program and rich discography, and they have received two ECHO Klassik awards and the German Record Critics Prize. In 2011, the quartet was awarded the Argentine Critic Price. During the concert, Baltacıgil will accompany the ensemble with his spontaneous musicality and nuances. Since 2011, Baltacıgil has been the principle cellist of the Seattle Symphony Orchestra. He received a standing ovation after his performances with Yo-Yo Ma, Itzhak Perlman and Christhoph Eschenbach, and in 2006, he performed at Carnegie Hall with the New York Youth Orchestra. Six years later, Baltacıgil appeared with the Berlin Philharmonic Orchestra under the baton of Sir Simon Rattle. Classical music enthusiasts will listen to the best of Ravel, Schubert and Mendelssohn.

İş Sanat's "Shining Stars" April program will welcome young pianist Ferhat Can Büyük at the Milli Reasürans Concert Hall on April 28. Starting his piano education at the age of five under the supervision of Aytaç Rızaguliyeva, Büyük entered the Istanbul University State Conservatory in 2008 and studied under piano professor Meral Yapalı. He gave his debut concert the Marmara University Concert Hall at the age of six and his first concerto with the Istanbul State Symphony Orchestra under the baton of Antonio Pirolli when he was 15. Büyük participated in the master classes of doyen pianists İdil Biret, Ewa Poplocka and Andre Diev, and has received critical acclaim. He will perform Beethoven, Chopin and Scarlatti at the upcoming concert.

Tom Harrell, one of the most qualified and renowned names of jazz trumpet, will be the last guest of İş Sanat's jazz series this season on April 21. Enjoying a career spanning more than 40 years and a discography of 260 songs, Harrell is referred to as today's most creative jazz musician and composer. He has successfully preserved his musical dynamism with his regular concerts and tourism and has been praised by Newsweek for his pure melodic genius. Harrell has worked with important names of jazz including Woody Herman, Bill Evans, Jim Hal, Horace Silver and Dizzie Gillespie. He is a frequent winner of Down Beat and Jazz Times magazines' Critics' and Readers' Polls and has received a Grammy nomination. The master trumpeter was also the Trumpeter of the Year nominee two years in a row for the 2010 and 2011 Jazz Journalists Association Awards. He will be accompanied by Jonathan Blake on drums, Ugonna Okegwo on bass, Danny Grissett on piano and Wayne Escoffery on tenor sax.

Dulce Pontes is İş Sanat's guest for its world music series in April. Following her big win at the Cancao International Festival in 1990, Pontes represented her country at the Eurovision Song Contest and became known internationally. She gave voice to long-forgotten Fado melodies with her album, which was released in 1993. "Cancao do Mar," which she performed for the movie "Primal Fear" starring Richard Gere and Edward Norton, is still one of her most played songs. Inspired by Arabic, African, Brazilian and Balkan melodies, the artist has collaborated with Andrea Bocelli, George Dalaras, Cesaria Evora and Carlos Guilherme. The artist also earned her fans love with Italian composer Ennio Morricone's unforgettable song in "Cinema Paradiso." Pontes will perform her beautiful songs on April 3.

İş Sanat is ready to introduce a shining star to classical music lovers. While he was still a student at the Royal Academy, Martynas Levickis suddenly became famous in his country after winning the TV show "Lithuania's Got Talent." He released his first album in 2013. The artist wants to prove to everybody that he can perform any genre anywhere in the world with his instrument, the accordion, which is usually solely identified with Eastern Europe and South Africa. He managed to write his name into music history with golden letters as the first accordionist who topped the music charts. During his concert at İş Sanat, the Geneva Camerata orchestra conducted by maestro David Greilsammer will accompany the Lithuanian artist. The orchestra aims to reach out to people from 7 to 70 with classical music. Greilsammer, who received positive feedback from music authorities after he was chosen as the New Artist of the Year at the French Music Awards in 2004, is known for his impressive concert programs. Martynas Levickis and Geneva Camerata will share the stage on April 14.
Last Update: Mar 20, 2015 9:47 pm
RELATED TOPICS