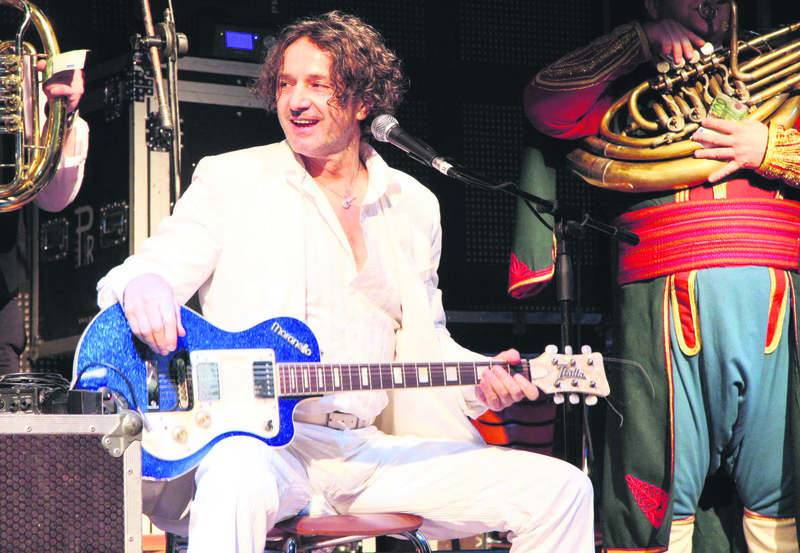 by daily sabah Apr 26, 2015 12:00 am
A household musician in the Balkans, Goran Bregovic will give concerts in Turkey with his famous Weddings and Funerals Orchestra from May 6 to Aug. 12. Referred to as the pioneer of eastern Balkan music, Bregovic will start his upcoming tour in Ankara on May 6 and continue at Istanbul's Volkswagen Arena on May 7. Having played sold-out concerts at prestigious halls, Bregovic will perform pieces from his over 21 albums and the cult soundtracks of leading director Emir Kusturica's "Underground" (1995), "Time of the Gypsies" (1989) and "Arizona Dream" (1993). His Turkey tour includes two other metropolitan cities - İzmir and Bursa. Born in Sarajevo to a Serbian mother and Croatian father, Bregovic will bring a blend of traditional Balkan music with Western influences. In his early years, he grew a deep passion for rock music. "In those times, Rock had a capital role in our lives. It was the only way we could make our voice heard, and publicly express our discontent without risking jail [or just about]," Bregovic said in one of his statements. He made compositions for renowned Turkish singer Sezen Aksu's album "Düğün ve Cenaze" (Wedding and Funeral) and gave a number of concerts with her afterward. The pioneer of Balkan music is also known for his duets with American musician Iggy Pop and Grammy-winning folk singer Cesaria Evoria. His Weddings and Funerals orchestra features echoes from Jewish and Gypsy weddings, chants from Orthodox and Catholic Church and Muslim invocations. The versatile artist truly reflects the history of a frontier where Catholics, Orthodox Christians and Muslims lived in harmony for centuries and made war. A Bregovic concert is a trip to all kinds of music genres from orchestra masterpieces to solo performances and from energetic dance music to slow rhythms.
Last Update: Apr 26, 2015 10:02 pm
RELATED TOPICS