Syrian refugee pianist performs in US to raise awareness 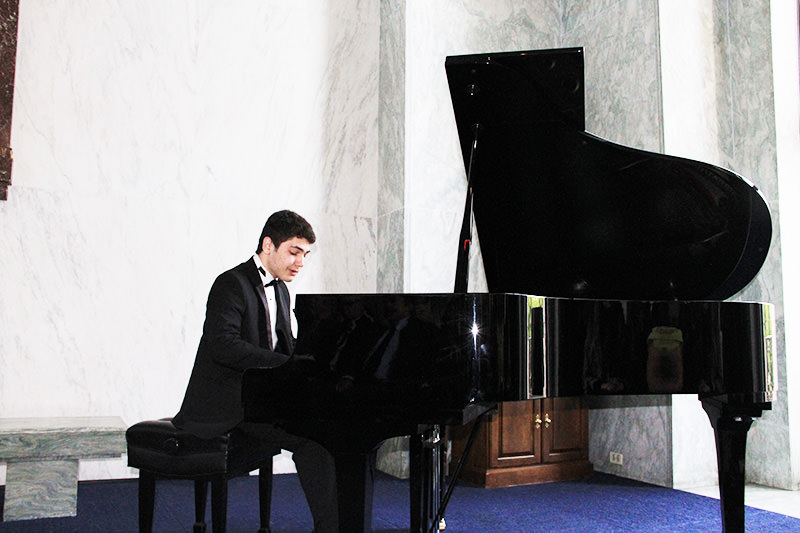 | AA Photo
by Anadolu Agency May 15, 2015 12:00 am
A Syrian refugee pianist Tambi Assad Cimuk performed in the US capital Washington, D.C., on Thursday night to raise awareness for the conflict in his country.

The Turkish embassy, with the International Rescue Committee, hosted 16-year old Cimuk for a special concert alongside a photography exhibition on Syrian refugees at the Rayburn House Office Building on Capitol Hill.

"I came the U.S. to tell people that the war is still (going) on in Syria, and people are still suffering because of the war," said Cimuk.

"I am not a journalist, and not a soldier," he added. "I have message to give people, which I do through my music."

The 16-year-old musician fled Syria about three years ago with his family to seek refuge in Turkey. They were placed in the northwestern Turkish city of Bursa.

Cimuk only touched a piano for the first time in his life two years ago in Turkey.

Now he is called the "next Sergei Rachmaninoff," who is considered among the greatest pianists of all times.

Cimuk was placed second out of nearly 20 participants at the fourth Stockholm International Music Competition last week, and also ranked first place at the Fifth International Competition in the German city of Mühlacker on April 2nd, and he aims to join the New York Conservatory.

"It's simple to say 'ranked second or first,' but he achieved all this within months, while his competitors have trained for years," said Rustem Avci, Cimuk's manager,

"The discovery of Cimuk's musical talent is a beacon of hope coming from a devastating civil war in a region that provides little other good news," said Turkish ambassador to the U.S. Serdar Kilic who spoke before Cimuk's performance. "We hope that this concert in the halls of Congress will raise greater awareness on the need to come together to bring peace for the millions of individuals who continue to suffer because of the Syrian conflict."

Cimuk applied for Turkish citizenship late 2014, a long and difficult process. His efforts finally bore fruit after he appeared in a television program along with his music producer. President Recep Tayyip Erdogan signed the decree that made Cimuk a Turkish national. The decree was also approved by the prime minister and 24 other Turkish ministers.

Ed Royce, a Republican representative of California, who is the chairman of the Committee on Foreign Affairs, lauded Turkey's effort to supply medical care, housing, and food for Syrian refugees, in his brief speech at the event.

More than 200,000 victims have been killed in Syria since the conflict began in 2011 between Bashar al-Assad's regime and opposition forces, according to the United Nations.

The Syrian conflict has created an acute refugee crisis, with as many as 3.8 million Syrians currently registered in neighboring Turkey, Jordan, Lebanon and Iraq. Turkey hosts nearly 2 million refugees inside its borders as the crisis in Syria enters its fifth year.
Last Update: May 15, 2015 5:26 pm
RELATED TOPICS