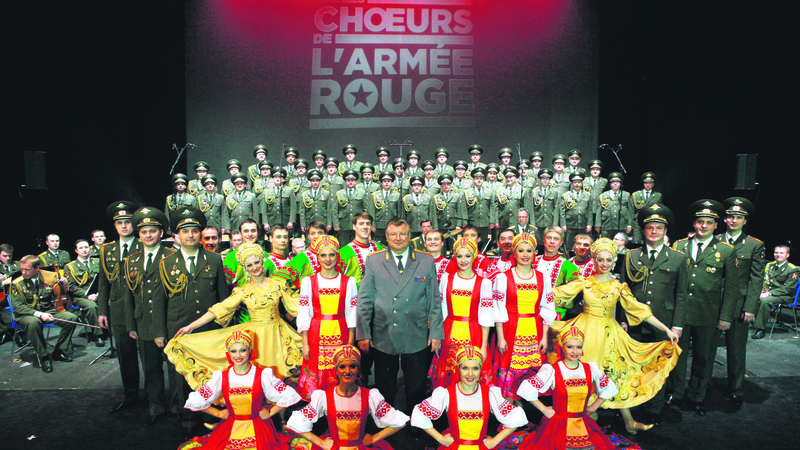 by Daily Sabah Jun 08, 2015 12:00 am
Russia's famous Red Army Choir, known as the Alexandrov Ensemble, will capture hearts at Istanbul's Zorlu Performing Arts Center (PSM) this Saturday and at Ankara Congresium on June 15. Said to be the world's biggest army choir and known for their covers for popular songs, the choir will perform a rich repertoire covering Russian folk songs, well-known arias of Mozart and Verdi, pop and rock music songs as well as Turkish songs. David Foster, Roger Waters, Jean Jacques Goldman and Steve Barakatt have worked with the choir featuring almost 120 members.

Formed in 1928 to boost the morale of the exhausted Soviet troops and glorify the spirit of the 1917 revolution, the Red Army Choir has appeared in over 50 countries, performing to more than 20 million people. The choir, which has kept the Russian culture alive for years, started its performances in 1939. The ensemble consists of soloists, dancers, orchestra members, chorists gathered from different military units and ranks. Their popular music performances such as "Kalinka," "Kernina," "Ave Maria" and "Katyusha" continue to attract large audiences.

The Red Army Choir will open its Turkey concerts with the Independence March, the national anthem of Turkey and perform songs by popular Turkish singers like Tarkan and the late Barış Manço. They will also sing Pharrell Williams's "Happy," The Beatles' "Hey Jude" and Daft Punk's "Get Lucky."
Last Update: Jun 08, 2015 1:29 am
RELATED TOPICS