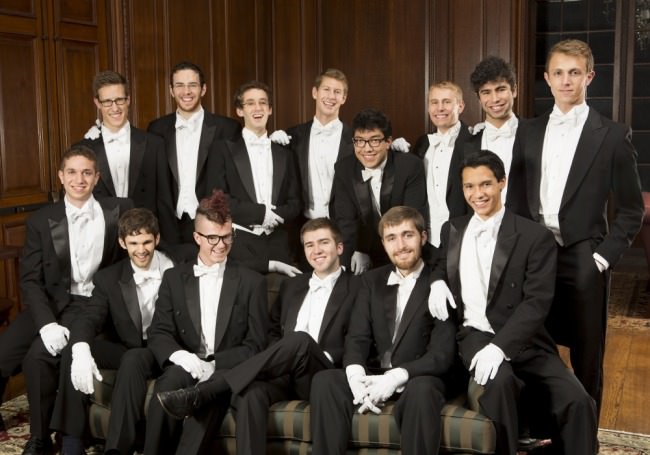 by Daily Sabah Jun 21, 2015 12:00 am
Whim n'Rhythm and Whiffenpoofs, Yale University's two world famous A Capella ensembles, will give a joint live performance at the Sounds of Bosphorus concert on Monday. Featuring 14 female and male members chosen from each year's senior classes, the singing groups are an important part of Yale tradition. The lack of instruments reveals the tender and strong voices of group members. They have been in Istanbul several times before, however it will be the first time that they have sung together. The concert will be a once-in-a-life-time Istanbul evening with these two long-rooted A Capella choirs. Sounds of Bosphorus will take place on a private cocktail prolonge cruise, accompanied by traditional Turkish foods and beverages. The cruise will depart from Kabataş Pier along the Bosphorus Strait. During their four-hour show, Whim n'Rhythm and Whiffenpoofs will perform a rich repertoire while the audience travels from one continent to another. Both Whim n'Rhythm and Whiffenpoofs have a masterful blend of musicianship and choreography.

Referenced as the world's oldest and best-known collegiate A Cappella group, the Whiffenpoofs was formed in 1909 and the "Whiffs" started to perform as a senior quartet that met for weekly concerts. The ensemble gave performances at highly prestigious venues such as the White House and the Lincoln Center. Today, the group is one of Yale's most celebrated institutions. Among its notable members, there was Prescott Bush, the grandfather of former U.S. President George Bush, operatic tenor John Stewart and American composer and song writer Cole Porter. Their renowned "Whiffenpoof Song" was covered by Elvis Presley, Bing Crosby and Louis Armstrong. At the end of ever concert, the members generally sing this song to mark their 100-year old tradition and friendship. Last year, the group gave a concert for U.S. President Barack Obama and toured around 25 countries.
It was in 1981 when Yale's all-female A Capella group Whim n'Rhythm was established by seven senior women. It was a response to the all-male Whiffenpoofs. Over the years, the group number increased to 14 women musicians. Similar to the Whiffenpoofs, Whim n'Rhythm has appeared on national and international stages and has given concerts in Cairo and Hong Kong as well as Los Angeles, New York and New England in the U.S. A new album featuring the group's latest arrangements and current members is produced each spring. Every year, 14 senior Yale men and females are selected to be in the Whiffenpoofs and Whim n'Rhythm.
Last Update: Jun 22, 2015 12:51 am
RELATED TOPICS