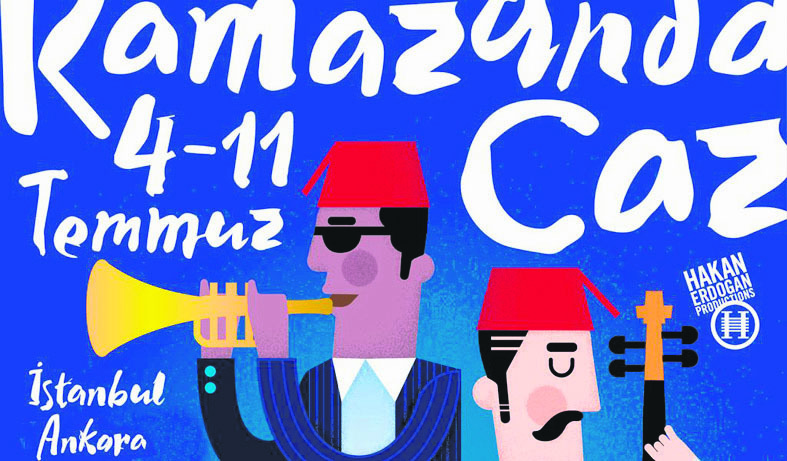 French Consul General to Turkey Muriel Domenach will host an iftar meal on July 10 at the French Consulate with a special concert as part of the Jazz in Ramadan Festival in Istanbul and Ankara. In partnership with Hakan Erdoğan Productions and the French Culture Center, the Andre Manoukian Quartet from France and four Turkish musicians, including renowned jazz performer and percussionist Okay Temiz, will perform following the iftar.

A prestigious jazz group in France, the Andre Manoukian Quartet will take the stage at 9:30 p.m. From the Caspian Sea to the Mediterranean, the group's concert repertoire will take listeners on a musical journey that touches melodies of different cultures. The French quartet will be accompanied by Temiz, master clarinetist Hasan Gırnatıcı, who is an extraordinary virtuoso of Turkish and Romani music, famous drummer Hacı Rüstem Çembeli and zurna virtuoso Ahmet Özden.

Born in Lyon in 1957, French-Armenian jazz pianist Manoukian has worked with prestigious musicians like Liane Foly, Charles Aznavour, Gilbert Becaud, Natacha Atlas, Janet Jackson and China Moses following his studies at the Berklee College of Music in Boston, Massachusetts. Manoukian blends the A'la turca drum rhythms of the Caucasus with piano melodies on his latest album "Melancholy," which re-interprets the festival-like music of Armenia. With his cosmopolitan team, he goes beyond the borders of the mind and regions. The Andre Manoukian Quartet will give their second concert in Turkey on July 11 in the French Embassy in Ankara.

Domenach hosted the first iftar meal at the French Consulate last year. In her press statement, she said that she wanted to continue such meals in the following years. She underlined the importance of brotherhood, the third slogan of France's national motto - liberty, equality and fraternity - especially during Ramadan, which has been blurred by terrorist attacks that exploit Islam. Domenach said the consulate would host a "brotherhood night" in the following days. "Islam is the second-biggest religion in France and the religion of peace. Muslims in France can pray freely, yet we are fighting against populist views and xenophobia," she said.

Domenach described the gathering of Manoukian and Turkish musicians as an example of brotherhood. She said French secularism is sometimes misunderstood. "French secularism does not refer to exclusion, but is a principle of freedom and unity. It means freedom for people from different religions and those who do not have religious faith," she said. Domenach also stressed that the French Foreign Ministry will organize an iftar meal with the participation of ambassadors from Organization of the Islamic Conference (OIC) member countries on July 9.
Last Update: Jul 01, 2015 8:32 pm
RELATED TOPICS