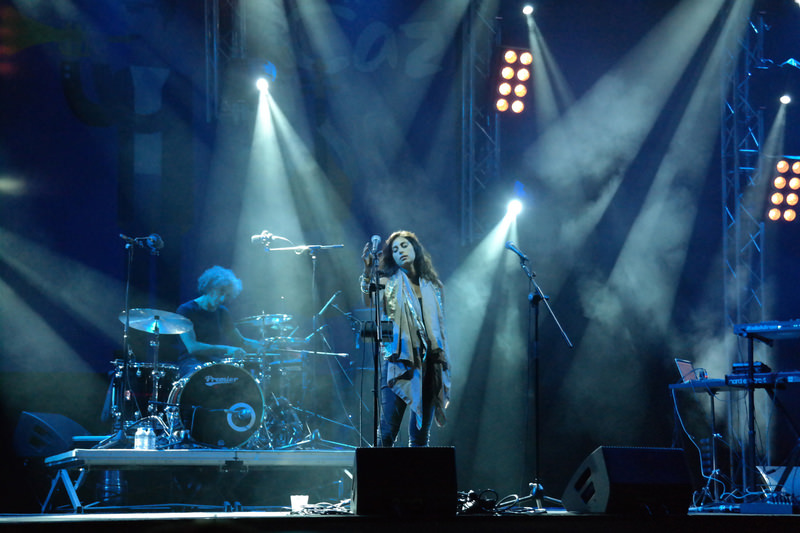 Describing herself as a victim of war, Yasmine Hamdan gave a concert as part of the Jazz in Ramadan Festival in Istanbul.

Lebanese singer and composer Yasmine Hamdan, who performed in Istanbul as part of the Jazz in Ramadan Festival, told Anadolu Agency (AA) that music allows her to reflect her emotions and create a connection with the outside world. Hamdan said she was an introvert as a child and was greatly influenced by the war in Lebanon and described herself as a child victim of war. Hamdan traveled to many countries and spent most of her childhood in Lebanon, Abu Dhabi, Greece and Kuwait. She returned to when Lebanon the war ended. "As a child, I would dream of singing, but it was a secret. I was shy in those years, an introverted person. I looked like a wild cat. Music allowed me to reflect my feelings, yet I did not think of becoming a musician," Hamdan said, adding that she had no opportunities and that there are no musicians in her family. "When I founded the Soapkills Group, underground music was not popular where I was living. There was no concert hall or professional musicians. I mean there was nothing, and we did everything with our own efforts," she said. Hamdan started singing at the age of 16, but began her professional career at 23. "I decided what I really wanted to do in my life. Music was a leisure activity for me at first, yet it became an indispensable part of my life. I knew it was my future," she said.

Her father supported her when she started her music career, but her mother was uneasy about it. Hamdan also said many people do not know much about her music. "People did not know what underground music is. For my mother, I was a lost child. I was a woman and my family was concerned about my future. They expected me to do better and have an easy life. Maybe they wanted a car, husband for me and me to be a waitress," she said. "In Lebanon, bourgeois culture was very common, but I broke some traditions," Hamdan said. "When you become an adult, you get married, have a child, spend and earn money. I did not want a life like that," she said.

Hamdan said her mother and father have Turkish origins. She said many of her family members have Turkish names like her mother Ayfer and another relative whose name is Yıldız. Hamdan travels to Turkey once or twice a year and said she wants to come to Istanbul more frequently. "I love Istanbul. Whenever I come here, the weather is beautiful. I do not know how weather is in winter, but I love its sun and sea. I also like Turkish food and the dynamic youth. Some parts of the city look like Lebanon and Beirut, however Istanbul is bigger and complicated," she said.

Hamdan was surprised to see a young population in Istanbul. "The city looks like a hyperactive country with high energy. Maybe it was because I generally visited tourist attractions," she added. Hamdan said she likes Turkish music, adding that there are similarities between Lebanese and Turkish music. "Turkish musicians are magnificent. Their interpretation and techniques are fabulous. In one of my concerts, a young Turkish girl presented an ud to me. Listening to the sound of ud is really fascinating," she said. Hamdan gave a concert at the Uniq Istanbul Open-air Stage and received a standing ovation after her performance.
Last Update: Jul 07, 2015 8:37 pm
RELATED TOPICS