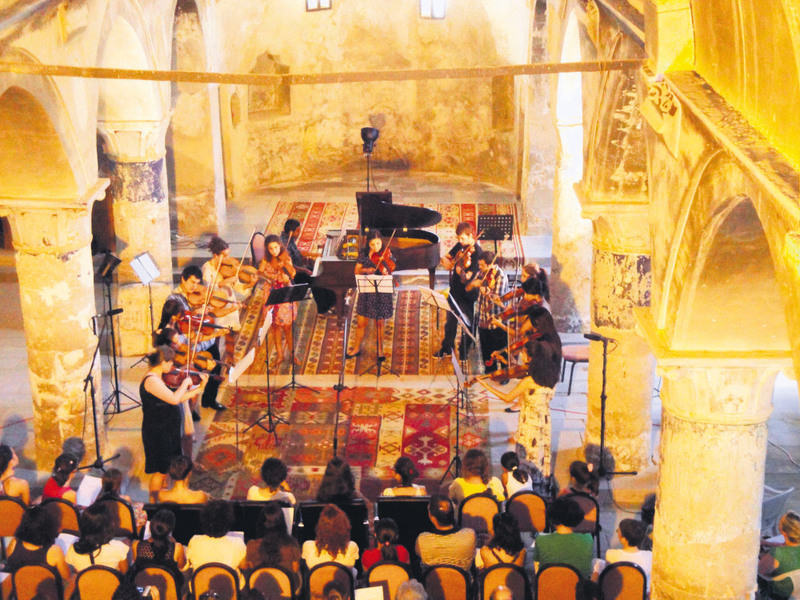 by Daily Sabah Jul 19, 2015 12:00 am
Travelers and residents of the coveted tourist destination Cappadocia will be treated to a of myriad musical events ranging from classical Western to classical Turkish music and jazz at the 6th International Music Festival "Klasik Keyifler" (Classical Joys) from Aug. 1-23. The annual music fest will be a great chance to listen to plenty of Mozart, Johannes Brahms, Igor Stravinsky, Bela Bartok and Antonin Dvorak as well as Tanburi Cemil Bey and İsmail Dede Efendi, the masters of classical Ottoman music.

The festival will start on Aug. 1 with an evening concert at Eleni Church, featuring violinist Ellen Jewett, also the festival's director; clarinetist Sacha Rattle and pianist Zeynep Özsuca Rattle, both founders of the innovative ensemble Berlin Counterpoint, as well as Sinan Dizmen and Çağdaş Özkan. Additional musicians participating in the festival include violinist James Buswell from the New England Conservatory; cellist Carol Ou from the Carpe Diem Quartet; Kurt Rohde, a composer and professor at the University of California Davis and recent recipient of the American Academy of Arts and Letters award; baroque specialist and cellist Elinor Frey; violinist William Harvey; guitarist Wulfin Lieske; Atilla Aldemir, the solo violist of the Konzerthaus Orchestra Berlin and violinist Ali Başeğmezler. Throughout the festival, there will be morning concerts at the Göreme Open-air Museum at 10:30 a.m.

As part of the festival, a new jazz program will be inaugurated with New York-based guitarist and composer Dave Allen, jazz musician Sibel Köse, American bassist Matt Hall and drummer Cem Aksel on Aug. 16 and Aug. 18. From Aug. 21 to Aug. 23, the Bilkent Chamber Orchestra will perform at the Gevher Nesibe Medical Museum, Güray Ceramics Museum and the Nevşehir Cultural Center. Ellen Jewett will perform as soloist in Vivaldi's "Four Seasons" and bandoneon player Tolga Salman will conclude the program with Astor Piazzolla's "Four Seasons."

Main festival venues will be the new underground Güray Ceramics Museum, the Aya Nikola Monastery, Eleni Church and an Ottoman-era madrasah that is currently used as the Cappadocia Vocational College. Musical events will also be held at the Casa de Ziya, the Nevşehir Cultural Center, Uçhisar Castle, the Fresco Mansions and the Ortahisar Folk Museum. Concurrently with the festival there will be a fascinating exhibition showcasing Hittite instruments that have been reconstructed from pictures on ancient vases. Curated by Şehvar Beşiroğlu, the exhibition will be on display at the Güray Ceramics Museum.