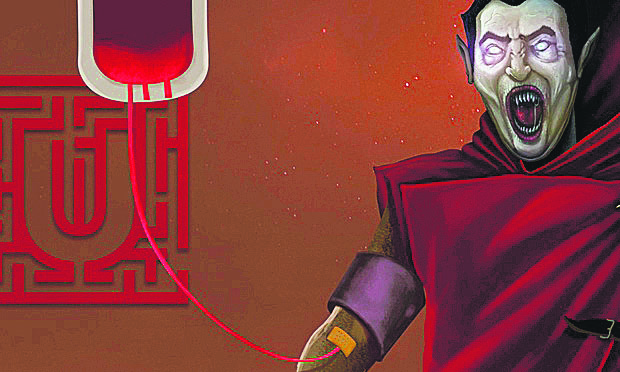 by Jul 23, 2015 12:00 am
A fanged Dracula with a blood bag hooked up to his arm is offering an unusual deal for tickets to a Romania music festival: Pay with blood.

"We have a bloody problem", "Don't suck, donate" and "Not only vampires need blood", say campaign flyers encouraging blood giving for tickets.

The Untold Festival has teamed up with Romania's national institute for blood transfusion INTS to provide free or discounted tickets in exchange for the blood, seeking to raise awareness in a country with one of Europe's lowest levels of blood donors.

Less than 2 percent of Romanians donate blood each year, one of the lowest figures in Europe.

The festival, which will take place from July 30 to August 2 in the Transylvanian city of Cluj, will be headlined by DJs Avicii and David Guetta, among others. People who had donated blood by Tuesday got festival tickets on the spot, while those who register receive discounts.

Up to 500 people are estimated to have "paid with blood" for their tickets, the organisers said in a statement. "'Pay with blood' is a novel and brave initiative that draws attention to a real need for blood in Romania," Untold's communications director Adrian Chereji said in the statement.

"We wanted to actively contribute to raising the number of donors and, at the same time, give fans a unique method to pay for their festival ticket." Organisers have said they expect as many as 300,000 people to attend the festival. A four-day ticket costs 309 lei ($76.35).