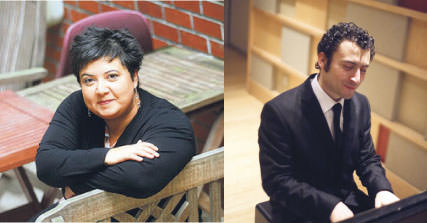 Bau015fak Yavuz (L) and Utar Artun
by Daily Sabah Aug 18, 2015 12:00 am
Jazz pianist Utar Artun and vocalist Başak Yavuz will head to the 58th Grammy Awards as jury members this coming February. Residing in Boston, Artun, 28, will be the youngest member of next year's jury committee. After graduating from the State Conservatory of Hacettepe University, Artun then studied at the Berklee College of Music on a grant. He won the Honorary Award at the Berklee Symphony Orchestra's (BCSO) composition competition.