Rhythm and color to embrace audience with gypsy music 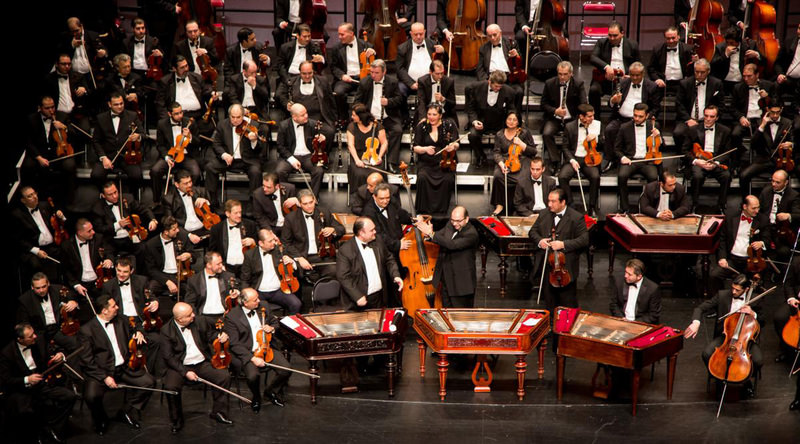 One of the most prominent gypsy orchestras in the world, the Budapest Gypsy Symphony Orchestra will perform a colorful and lively performance on Istanbul stage

With its 100 members, Budapest Gypsy Symphony Orchestra will perform at Ülker Sports Arena on Nov. 21. Speaking during a press meeting, Farkas Beke Nandor, the orchestra head, said they are proud to perform in Istanbul again. The group previously gave concerts in Ankara and İzmir. Regarding the current terror attacks, Nandor said, "We have heard about the tragic news and feel very sorry. The orchestra wants to show a good performance that will help the audience forget what they have seen so far." Diana Kalkanoğlu, the co-founder of Golden Bridge, said the orchestra will celebrate its 30th year in Istanbul.

"When we talk about symphony orchestras, they have a common vision. However, this group consists of only stringed instruments. They are also the only orchestra in the world that performs without looking at musical scores," Kalkanoğlu said. Some members have played in the orchestra since its foundation. "There are award-winning and famous virtuosos," she said. Kalkanoğlu said the concert will be full of surprises and the orchestra will interpret the song "Fıldır Fıldır Hayriye" and use the kemençe, a traditional stringed instrument. Music critiques consider the group as the world's most famous and largest gypsy orchestra. So far, the orchestra has given more than 1,000 concerts. Aside from performing classical music like Franz Liszt, Bela Bartok, Zoltan Kodaly, Jeno Hubay, Ferenc Erkel, Johannes Brahms, Pyotr Ilyich Tchaikovsky, Pablo de Sarasate and Johann Strauss, the orchestra interprets Hungarian gypsy and folk music. Ökrös Oszkar, the best cimbalmon virtuoso in the world, and Hungarian violinist Jozsef Lendvai Csocsi take part in the orchestra, which features 60 violins, six violas, six cellos, 10 contrabass, nine clarinets and six cymbals.

The orchestra gathered after the death of Hungarian violinist Sandor Jaroka in 1984 and was founded one year later following an improvised performance. Due to its dynamic nature, the orchestra was honored with the title of "Hungarikum" by the Hungarian Parliament last year. It received the award at the 45th Carthage International Music Festival and Hungarian Heritage Awards. In 2000, the orchestra was included in the Guinness Book of Records. So far, they have released 21 CDs and five DVDs. Their eighth and 14th albums received Platinum and Gold disc awards.
RELATED TOPICS