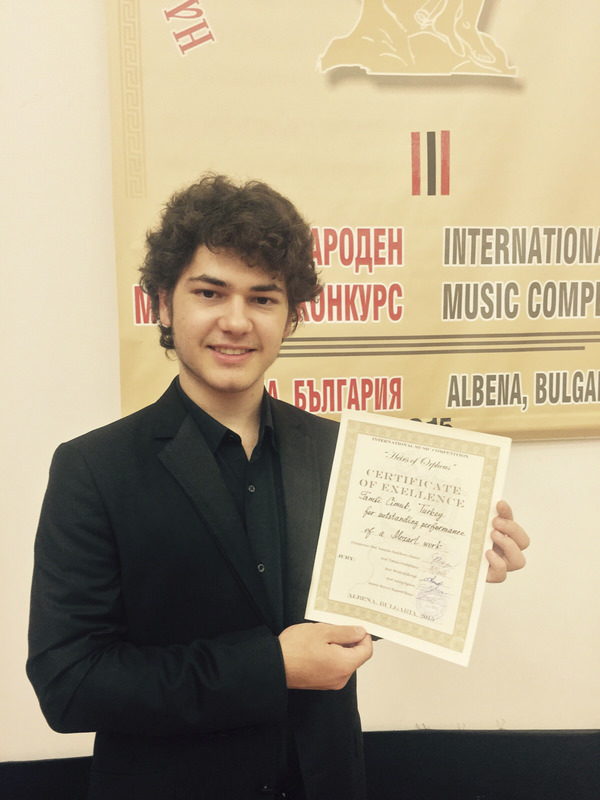 by Daily Sabah Sep 11, 2015 12:00 am
Syrian-Turkish pianist Tambi Asaad Cimuk, 17, came first in an international competition "Heirs of Orpheus" in Bulgaria, according to a statement by the Bursa Metropolitan Municipality.

Cimuk took shelter in Turkey about three years ago before settling in Bursa last year with his family. Cimuk's performance was evaluated by a jury committee comprised of music scholars from the U.S., Canada, Russia and Germany-based conservatories. He won the Outstanding Mozart Performance Certificate in the third edition of the competition.

Described as a "genius of the future" by some music critics, Cimuk has also won a success certificate from the Long Island Conservatory in the U.S., where he wants to study in 2017. He expressed his gratitude to his trainer Elena Çekiç, supervisor Rüstem Avcı as well as Mayor Recep Altepe and his staff. "I am very excited and proud," he said.

Çekiç said Cimuk works very hard. "He is a highly disciplined student. We have no problem with him. This summer, we attended a 44-day music camp in the U.S. with the help of the Bursa Metropolitan Municipality. It was very useful. We are aware of our responsibilities and will be happier when Tambi makes Turkey and the city of Bursa proud with his future success," Çekiç concluded.

The 17-year-old musician fled Syria about three years ago with his family to seek refuge in Turkey. They were placed in the northwestern Turkish city of Bursa.

Cimuk only touched a piano for the first time in his life two years ago in Turkey.

Now he is called the "next Sergei Rachmaninoff," who is considered among the greatest pianists of all times.

Cimuk applied for Turkish citizenship late 2014, a long and difficult process. His efforts finally bore fruit after he appeared in a television program along with his music producer. President Recep Tayyip Erdoğan signed the decree that made Cimuk a Turkish national. The decree was also approved by the prime minister and 24 other Turkish ministers.

More than 300,000 victims have been killed in Syria since the conflict began in 2011 between Bashar al-Assad's regime and opposition forces, according to the United Nations.

The Syrian conflict has created an acute refugee crisis, with as many as 3.8 million Syrians currently registered in neighboring Turkey, Jordan, Lebanon and Iraq. Turkey hosts nearly 2 million refugees inside its borders as the crisis in Syria enters its fifth year.