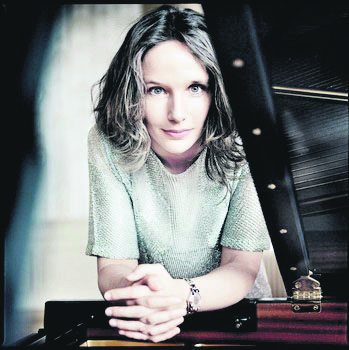 by Zeynep Esra İstanbullu Jan 07, 2016 12:00 am
İş Sanat continues to host the most anticipated live performances of the year. Considered the Renaissance woman of her time, pianist Helene Grimaud will perform compositions by Stravinsky, Bach, Prokofiev and Mozart on Jan. 19, accompanied by the Swedish Basel Chamber Orchestra. She broke new ground in the music industry with her bold performances that dazzle audience members. In her astonishing debut, Grimaud shared the stage with the Orchestre de Paris on the invitation of famous conductor Daniel Barenboim following her 1987 performance in Tokyo.

She has since won many awards for her studio records, including Choc du Monde de la Musique, Diapason d'Or, Grand Prix du Disque, Midem Classical and Echo Klassik. The Basel Chamber Orchestra, which has accompanied world-renowned musicians such as Julia Fischer, Daniel Hope, Tabea Zimmermann, Renaud Capuçon, Giuliano Carmignola and Bobby McFerrin, was awarded an ECHO Klassik for "Best Opera Recording" with their album of Telemann's arias. The ensemble also recorded Beethoven's Symphony No. 9 and all of Bach's compositions.
RELATED TOPICS