Street musicians of Skopje spread universal love with their music 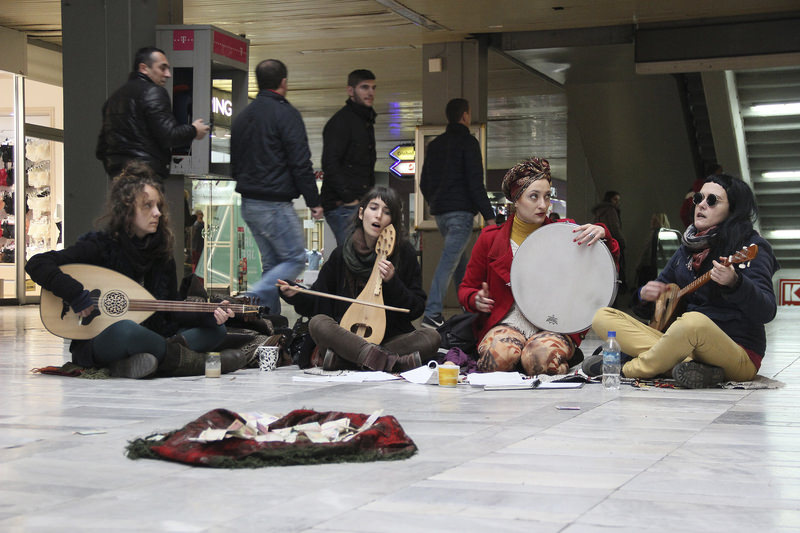 by Anadolu Agency Feb 17, 2016 12:00 am
The band "Peri" (Fairy), which features string and percussion instruments, plays music in Albanian, Turkish, Bulgarian, Macedonian and Romanian on the most-visited avenue in Skopje, the capital city of Macedonia, attracting the interest of tourists. Speaking to Anadolu Agency, band members Lea, Kate, Eva and Filiz spoke of how much they are in love with the magic of music and how they began playing in public places. The band members claimed that they emphasize the universality of the concepts of equality and solidarity with the music they make.

Lea said that Filiz, another member of the band, came up with the band's name and they decided to make music in public places to support street artists during a project that they took part in together. "We emphasize the importance of equality and solidarity by making music in different Balkan languages. Apart from Macedonian, we sing songs in Albanian, Turkish, Bulgarian and Romanian and deliver a universal idea to our audience. I hope our message reaches out to all the people," said Lea. She said that the streets are their stage, which helps them to reach larger masses. "Actually, we are trading with the audience. We give them our music and they listen to us. We are spreading the culture of accessibility through our music. Whoever wants to be a part of or music can come, listen and enjoy our music."

Kate, another member of Peri, said that the band is an important part of her life. "These friends are the best things that ever happened to me. The life on the street is amazing because we are able to share what we do with all people. For instance, a person who does not have any money can listen to our music as well. This makes me happy the most. We are free and everywhere around the world is our stage." Eva told that they are making original music and pointed out that their repertoire is original and traditional which makes them different from other musicians. Eva, who believes that people should communicate with their hearts not with their tongues, said, "We are trying to offer a brotherly and sisterly love to people. Our audience enjoys it and offers great feedback. People of every age stop and listen to us. This makes me very happy."
RELATED TOPICS