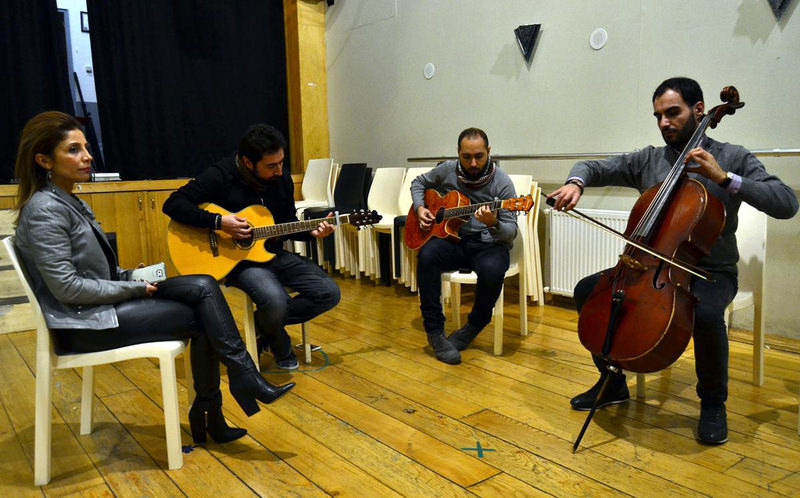 by Anadolu Agency Apr 20, 2016 12:00 am
A musical project meant to bring together musicians from Turkey and Armenia, two countries with a historically rocky relationship, has borne its first fruit in a song to promote peace. The Melody for Harmony project, sponsored by the U.S. Embassy in Armenia, brought together musicians from both countries for concerts in Istanbul and Armenia's capital, Yerevan, last December. Their English-language peace song, "Don't Blame Me," was played at both concerts and has been posted to YouTube.

English-language alternative rock band The Beautified Project, formed in London in 2005 by singer/songwriter Andre Simonian, took part in the project from Armenia, while well-known Turkish musicians Göksel Baktagir, Yurdal Tokcan, Burak Malkoç, and Mert Elmas participated from Turkey. "Don't Blame Me" was written and composed by Simonian, with classical Turkish and Western contributions from Baktagir. The four-minute-plus song begins with the lyrics, "Don't blame me, I'm innocent, I just happened to be in your way."

Turks and Armenians lived together for centuries in the Ottoman era until the mass deportations of 1915, which Armenia describes as "genocide," a charge Turkey denies, stating that killings took place on both sides during World War I. Speaking to Anadolu Agency, Turkish-Armenian singer Sibil Pektorosoğlu, a guest performer at both concerts, said the song is a synthesis of East and West. Pektorosoglu said she hopes that with the help of the universal power of music, the Melody for Harmony project will bring together musicians from other countries embroiled in political disputes. "We need the creative power of music. I hope that this project travels around the world and will not just end with the Istanbul and Yerevan concerts."