Ukraine’s Jamala wins Eurovision with a lament for Crimean Tatars 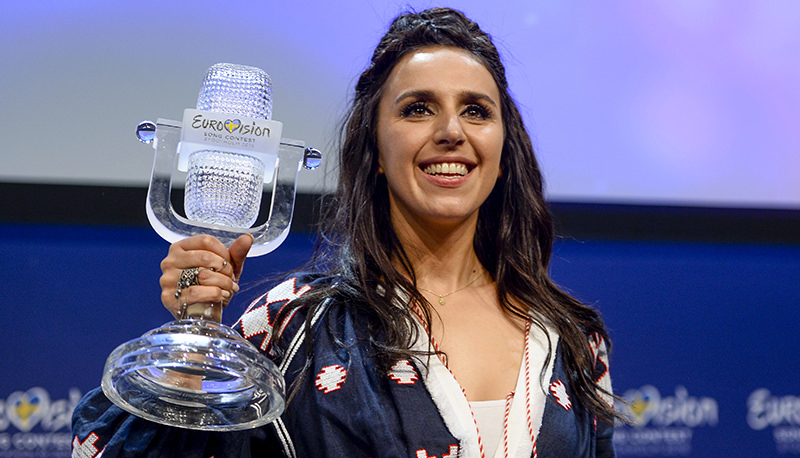 Ukraine's Jamala smiles as she shows her trophy at a press conference after winning the 2016 Eurovision Song Contest final at the Ericsson Globe Arena in Stockholm, Sweden, Sunday, May 15, 2016 (AP Photo)
by Compiled from Wire Services May 15, 2016 12:00 am

"When strangers are coming, they come to your house, they kill you all and say, 'we're not guilty, not guilty'."

Those are the harrowing opening words of war-scarred Ukraine's winning entry for the Eurovision song contest -- a flamboyant and festive occasion more normally associated with laughs than tears.

After a tense vote count, during which it seemed Australia was going to run away with the crown until the audience votes came in, Jamala was declared the winner in Stockholm after a heart-felt performance of "1944", a song about the deportations of Crimean Tatars during World War II.

Over a span of three days in May 1944, Stalin deported the Turkic ethnic group thousands of kilometres (miles) to the east, where nearly half them died in the harsh conditions.

Jamala's great-grandmother was in her mid-20s when she, her four sons and daughter were expelled, while her husband fought against the Nazis in the Soviet Army's ranks.

In a journey that took several weeks, about 8,000 people -- mostly the elderly and children -- died of thirst and typhoid.

Nazalkhan's daughter did not survive the tortuous trek and "her body was thrown from the car like garbage", Jamala recalled.

Germany was the worst performer of the evening, with Jamie-Lee Kriewitz's "Ghost" scoring just 11 points, followed by the Czech Republic with 41 points.

They said Jamala's song was "about her family members", without offering further details.

Jamala herself described the win as "amazing".

"I was sure that if you sing, if you talk about truth it really could touch people," the 32-year-old said at the winner's press conference.

The stunning turnaround in the final minutes of the show capped an eventful 61st edition of the love-it-or-hate-it kitsch fest, which was expected to be the most-watched Eurovision since the event was first staged in 1956.

Scores were decided by national juries as well as viewers. In an attempt to give the outcome a more democratic feel this year, fans were given the final say -- adding some last-minute suspense to the contest.

Among the evening's other highlights was a guest appearance by US pop star Justin Timberlake, who entertained the crowd with his hit "Rock Your Body" before performing his new single, the upbeat "Can't Stop the Feeling", which itself wouldn't have sounded out of place in the Eurovision line-up.

In another sign of the contest's growing appeal, Eurovision was for the first time broadcast live in the United States on the Logo channel, which is aimed at the LGBT (lesbian, gay, bisexual and transgender) community.

The show was also live-streamed on YouTube, giving Google a piece of a pie once reserved for European public broadcasters.

Characterised by critics as a potpourri of bizarre performance antics, special effects and cheese, the light-hearted contest usually tries to avoid controversy and steer clear of geopolitics but this year was always going to be different.

Political leaders in Moscow and Crimea had initially sought to get Jamala's song disqualified, arguing that it criticised Russia's annexation of the Black Sea peninsula in March 2014.

The jury approved the lyrics nonetheless, setting the stage for a monumental confrontation.

Inspired by Jamala's great-grandmother's story, "1944" recounts the deportation of the Crimean Tatars by Soviet strongman Joseph Stalin, and she sings it partly in the Tatar language, she says, because "it's in my blood."

The song has resonance for contemporary Ukraine, where memories of that horror were revived by Russia's seizure of Crimea, and Jamala's poignant lyrics tell the story of a people with a history of persecution that continues to this day.

Ukrainian President Petro Poroshenko was among the first to congratulate Jamala on her victory.

"Yes!!!" Poroshenko tweeted. "An unbelievable performance and victory! All of Ukraine gives you its heartfelt thanks, Jamala."

Ahead of showtime, bookies had tipped Russia's Lazarev and his catchy "You Are the Only One" tune to win the contest between 26 finalists -- 25 Europeans and one Australian.

Lazarev, popular in his own country and eastern European nations, has built an eventful career as a singer, actor and TV host.

He has also drawn admiration from gay rights campaigners for speaking out against his country's climate of homophobia.

Bulgaria, Sweden and France made up the competition's top six.